The big university competition of 2014

Country boundaries no longer tie us down or limit us to a restricted range of choices for jobs or schools. Companies now work inside a worldwide spider web where Asian organizations have European firms as competitors. The same principle applies to schools as well. No longer are students restricted to national choices when it comes to universities. Today, more than ever, the borders that once kept all of us apart are becoming what they were in the first place: just lines on a map with little significance. But how does this translate for educational institutions, such as universities? What does having an international target public imply?

First and foremost, universities today have to work harder, better and faster than ever in order to keep up. Not only is the world evolving at an ever increasing rate, but people have gained the power of free information and knowledge and they’re using it to make the best choices for themselves. Thus, higher-education institutions have to become, and be seen, as the best choice for their international public.

For this to happen, the power of judgment needs to be handed down to an external source which can objectively measure and assess performance across various universities in the world. developed a standardized tool designed to measure and rank higher-education institutions according to their performance. The World University Ranking (WUR) has become the single most thorough analysis of universities worldwide.

At the end of each year, a top 400 is compiled, showing which university scored the highest and the lowest according to their measurements. The tool they use is especially designed for this purpose and it uses performance indicators which target the central activities of all universities. As explained on their website, the methodology employs “13 carefully calibrated performance indicators to provide the most comprehensive and balanced comparisons, which are trusted by students, academics, university leaders, industry and governments.”

The performance indicators had been grouped into five areas with a specific percentage applied to each of them in order to form the overall score. Thus, the areas are defined as following:

The top three power positions have remained unchanged over the year, with California’s Caltech dominating the ranking with 94.3 points, followed by Harvard University and Oxford with 93.3 and 93.2, respectively. 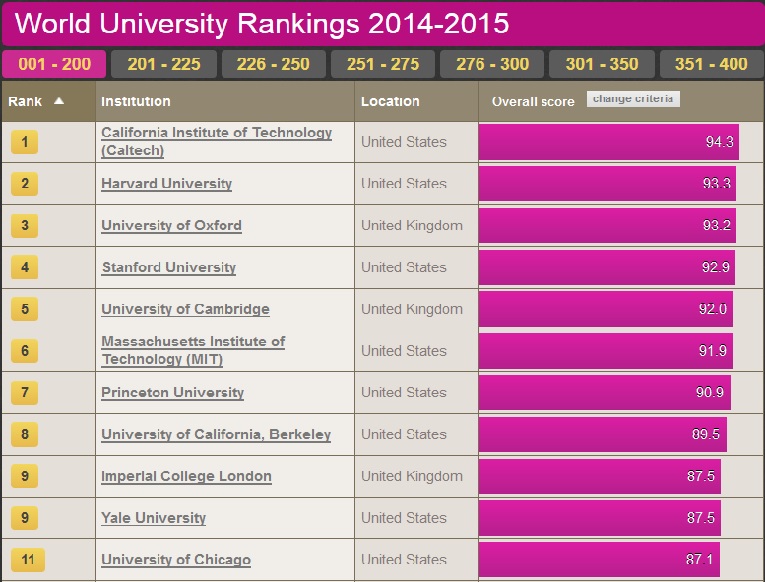 As expected, the top ten positions are dominated by universities from the United States and the United Kingdom. However, a shift in the paradigm is beginning to make itself seen in the ranking. As the WUR observed, Asian universities have begun to gain more terrain, slowly but steadily. In exchange, USA and UK schools are declining at an observable place.

What comes as a surprise in this year’s ranking is the fall of western universities and the rise of eastern ones. Although the shift in power towards Asian nations is not necessarily a surprise anymore, the pace of change is. A slow and steady movement until last year has somewhat changed into a fast-paced climb for universities in Asia.

If in 2013 Caltech obtained 94.9, in 2014 it decreased to 94.3. The same situation can be seen at the two runner-up universities: Harvard fell 0.6 points while Oxford lost 0.7 points. On the other side of the spectrum, the Hong Kong University of Science and Technology has risen 11 positions since 2011. Another Asian institution, the National University of Singapore, is now preparing to enter the top 25 universities. Some may remember that only two years ago, in the 2012 ranking, the university was closer to the 40th positions rather than the 20th. Probably the most astonishing evolution, though, comes from the Nanyang Technological University. If four years ago the institution ranked number 169, now it has climbed to the 61st position.

Universities have, indeed, their own battles to fight in and, within the last decade, the power seems to be shifting from western nations towards eastern territories. However, one must keep in mind that this ranking is not constructed based on the choice of people for one university over another. The World University Ranking is more complex and complete as it employs a wide range of criteria and performance indicators, ranging from diversity on campus to income generated by the institution.

The sustainable workforce: beyond the cost of an unfilled vacancy
Master in Managing business growth through System Dynamics and Accounting Models – A strategic control perspective – 11th Edition