Movie industry KPIs – Are Golden Globes a good predictor for the Oscar Awards?

Written by Adelina Chelniciuc on February 1, 2011. Posted in Articles, KPI

Addressing this question is an interesting statistic was put together by analysts from The Economist. The statistic based on # Instances when Golden Globe winner also won Oscar, gives an informed perspective on the success recorded by Golden Globe winners at Oscars over time. 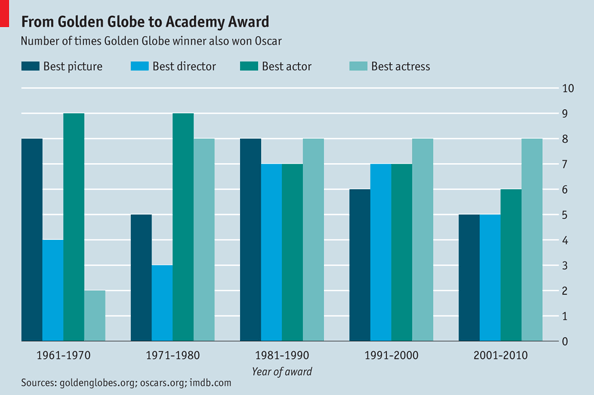 The statistics reveal that the correlation Golden Globe winners to Oscar winners mostly stands. However, over the last decade, figures show that Golden Globe winners for best picture and best director won the Oscar only in 5 out of the 10 ceremonies, while winners of the Golden Globe best actor and actress awards were crowned with the same distinction at Oscars in 6 respectively in 8 out of the last 10 occasions.

The outcome for this year’s edition of the Oscar awards will be known in a few weeks. The Academy Awards ceremony will take place on 27th of February in Los Angeles.

To explore more KPIs for the movie industry visit the KPIs catalogue on smartKPIs.com. Some of the most popular KPIs in this category are:

KPIs in practice: METRO performance results
An Australian KPI: # Waves of kangaroos on the racing course