Written by Raluca Vintilă on May 18, 2015. Posted in Around the world, Articles, Trending

Every country on the planet has its own monetary concerns. Have you ever thought about what sort of things people are most interested in, when scanning for the cost of something? What costs are most searched for in each country and how often does the same inquiry repeat itself, from one nation to another?

Fixr.com has examined Google autocomplete search terms in relation to different countries. The compilation of data based on common Google searches reveals the Cost Obsessions Around the World infographic with comic, intrigued and fascinating results. Comparing the results of different countries illustrates the perception of people around the world.

Except for the widespread, worldwide interest in beer prices, the cost obsessions list provides many more controversial results, such as slaves (Mauritania), prostitution (Brazil), kidney (Iran), in vitro fertilization (Australia), and watermelon (Japan). 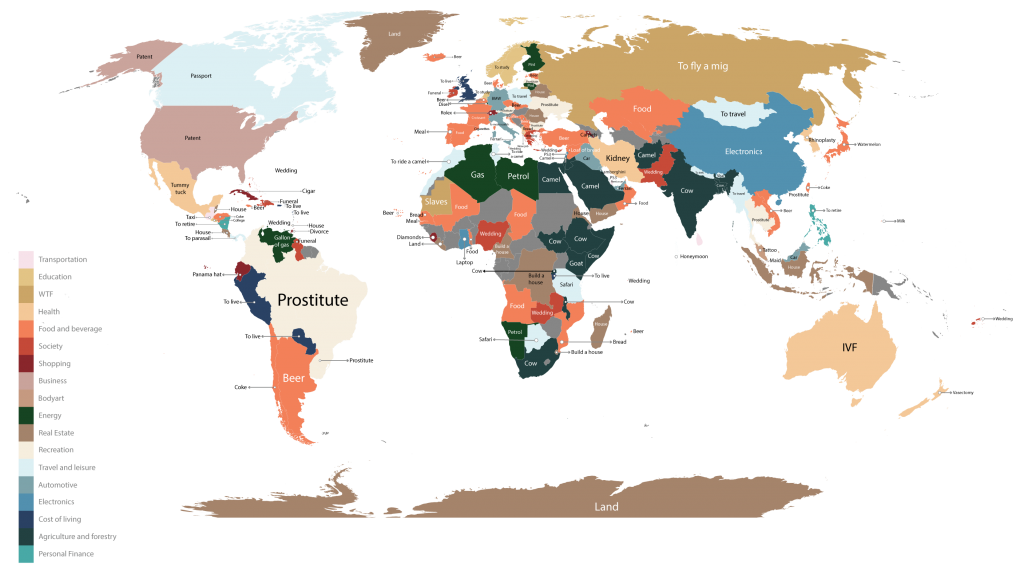 We all care about money! And that’s a fact. Let’s take a detailed look at Fixr’s results! The most common searches of costs, grouped accordingly to continents, are the following:

If you ever wondered what kind of things people are interested to buy, and in which country, then let’s embark on a journey around the globe, with small stops in each continent, and discover a little more of the insights this analysis has to offer.

In North America, people are mostly interested in the cost of a passport, as their travelling appetite is pushing their financial efforts in order to escape from the monotonous daily schedule. It might be that they are trying to go on the other side of the continent, in South America, where the biggest cost obsessions are related to beer. The average price of a beer in Argentina is €1.05, but curiosity still remains about the actual value of the rest of the things Google users were most interested in for this area.

Curiously, flying a MiG aircraft is a popular search queries when speaking of costs in Russia. A 25 minutes aerobatic flight with a MiG 29 reaches the €11.500 price tag. The results on the number of people that actually get into the cockpit would complete the image of this study. Staying a little bit longer on Europe’s map, we discover interests in a mixture of things, such as BMW, Ferrari, Rolex watches and carpets.

In our journey through the world’s biggest cost obsessions, we need to make a stop in Asia, which has results that reflect the continent’s cultural diversity. If we look closely, we will discover a large interest in Iran for kidneys. However, Iran is the only country in the world where selling and buying kidneys is legal. On the other side, Google users were most interested in China’s electronics, whereas the price of cows is of prime importance in India.

It turned out that Google searches for the cost of watermelon represent a big interest in Japan. Japanese cuisine offers a variety of dishes made out of rice, seafood and noodles, but even though watermelon is not on the list, it surprisingly stirs concerns in terms of costs. There is a terrible over-pricing for watermelon caused by the majority of imports in the land of the Rising sun, taking it to a shocking $40 for a medium fruit.

Shifting the journey towards Africa, we can easily notice that the cost of building a house is among the greatest concerns as far as pricing goes, next to the cost of land or the cost of a wedding. Focusing on humanity’s more serious problems, the interest in African countries focuses on food and the necessities of life, highly correlated with slave purchases in Mauritania. As a paradox of this situation, Sierra Leona pops out of the crowd with the costs of glamorous diamonds.

Australia’s concerns related to the health sector are far away from Antarctica’s land interests and from the rest of the world’s common searches about costs. With the increased interest in passing genes to descendants, we can only hope that the medical investment in fertility treatments will be successful.

Except the controversial search results, the study from Fixr.com has, at the same time, a significant informative purpose, exposing global concerns on livestock, food and beverage, real estate, travel and recreation, that prove, overall, to be the biggest cost obsessions. It offers us a peek into the reality of the most common Google searches on costs around the world.

Our recommendation is to live a life you will remember, and continue the world journey beyond Google autocomplete search terms. Experience by yourself how much does it cost, and how does it feel to drink a beer in Argentina, to eat a watermelon in Japan, or to fly with a MiG aircraft in Russia. Someone has to double check and confirm!