Written by Denisa Călin on April 30, 2010. Posted in Around the world, Articles, KPI

The Higher Education Statistics Agency (HESA) – a private limited company which has formal agreements with government departments to provide the data which they require, and it is funded by subscription from all of the universities and higher education colleges throughout the United Kingdom.

How Following the recommendations of the National Committee of Inquiry into Higher Education, the Government asked the funding councils to develop suitable indicators and benchmarks of performance in the higher education sector. The Performance Indicators Steering Group (PISG) was established, with membership drawn from government departments, the funding councils and representative bodies. Since 2002/03, HESA has published the Performance Indicators on behalf of Higher Education Funding Council for England (HEFCE) who published them previously.

Results The set of Performance Indicators (PIs) was published in April 2010, by HESA is the twelfth in the series. The indicators are used for all publicly funded higher education institutions in the UK and they currently cover:

Nationally, over 90% of 17 year-olds in full-time education attend schools or colleges in the state sector. 88.5% of young entrants to full-time first degree courses in 2008/09 had attended such schools, Chart 1 bellow shows the pattern.  (HESA, 2010) 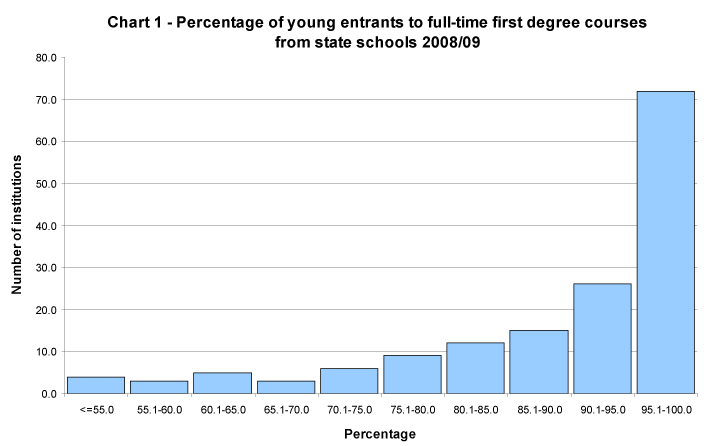