Performance Management in the automotive industry: Volkswagen, Toyota and Fiat

The automotive industry is a term that covers a wide range of companies and organizations involved in the design, development, manufacturing, marketing and selling of motor vehicles. It is one of the most competitive industries, as well as a huge employer of skilled workforce and a key driver of knowledge and innovation. Therefore, more and more companies within the automotive industry are developing Performance Management systems in order to increase and efficiently appraise their performance. 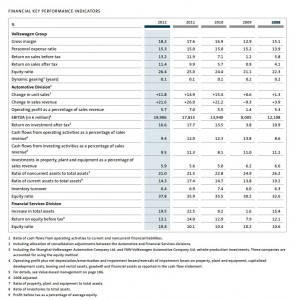 Volkswagen is the biggest German automaker and the third largest one in the world. Its goal, as stated in the 2012 Annual Report, is to become the world’s leading automaker by 2018 – both economically and ecologically. In order to achieve this goal, the company has implemented a strong Performance Management (PM) system: “The improved control efficiency and the transparency of the KPI system allow Volkswagen to meet the increasing expectations of its stakeholders for an up-to-date, differentiated presentation of the Company’s CSR and sustainability performance”.

The report presents the evolution of the financial KPIs in the period 2008-2012, but it also offers details about the non-financial KPIs. These include the processes in the areas of research and development, procurement, production, sales and marketing, information technology and quality assurance.

Since the beginning of 2011, Volkswagen has introduced a performance-based remuneration component, in order to recognize employees’ individual achievements. This system is not singular in the industry. Mitsubishi Corporation is another example of performance-related remuneration, at least when it comes to the Directors’ monthly salaries.

In 2013, Toyota was the largest automobile manufacturer by production and it has a well-earned reputation for excellence in quality, cost reduction and hitting the market with vehicles that sell. Toyota has become a model through its Production System, an integrated socio-technical system that comprises its management philosophy and practices. The main principles, as exposed by Jeffrey K. Liker and David Meier in their book “The Toyota Way Fieldbook” rely on long-term philosophy, standardized tasks and processes, solving root problems, lean manufacturing and continuous improvement. However, the most important element of the Toyota philosophy seems to be the Human Resources Management. As Eiji Toyoda himself stated, “Because people make our automobiles, nothing gets started until we train and educate our people”. Therefore, as the operator, not the machine, is the most important asset, one of the most important principles is to add value to the company by developing the employees and partners.

In 2011, Fiat was the fourth largest European automaker by production behind Volkswagen Group, PSA, and Renault and the eleventh largest automaker by production in the world. In its most recent Sustainability Report, published in 2013, Fiat presents the usage of Key Performance Indicators in 2012, as well as the plans to assess performance in 2013. As stated in the report, “KPIs are regularly monitored to enable greater coverage and in-depth analysis of the impacts of distribution flows”. Therefore, as part of the Sustainability Plan, Fiat Group established the following targets for 2013 regarding KPIs in multiple areas: