Gwinnett County is one of “America’s fastest-growing counties for the past 20 years”. The way it managed to achieve and maintain such a performance is by having a successful management for each of its departments. In what follows, two examples are presented for how the implementation of a performance management system has led to real improvements, in the Fire and Emergency Services and in the Department of Planning and Development.

It is the largest fire service district in Georgia, whose mission is to “save lives and protect property, while delivering the highest quality of service by holding the principles of truth, trust, respect, and unity.”

Until 2005, moment when a Balanced Scorecard (BSC) was implemented, few indicators were monitored, and they only focused on inputs, as in the case of # Calls.

They spoke little about the fire service’s performance. At that point, the fire officials understood that a change is needed, and the move should be made to track rather outcomes than inputs.

Once the performance management system based on the BSC was set in place, improvement was visible within the decision making process, which had been previously affected by poor data. Another area in which the new system made a difference was the department’s warehousing system. Before the implementation, there were serious problems in terms of oversupplies, or on the other hand, out of stock or expired items.

With the help of the BSC system, the fire service managed to reduce inventory by 54%, expired pharmaceuticals by 81% and to drive down expired medical supplies to less than 1%. All these improvements not only led to eliminating shortages, but also to saving money.

With the performance management system in place, the department now monitors indicators such as # Call response time, # Time to transfer patients with chest pain to the hospital, # Volunteer hours donated to the department and % Employees who participate in the career awareness program.

Turning to the Planning and Development department, its mission is to “enhance the quality of life and property values in Gwinnett County by planning for growth and enforcing construction and environmental standards for development in new and revitalizing residential and non-residential neighborhoods.”

The BSC system implemented within the department focuses on indicators such as “% Customer satisfaction”, “# Development incentives offered”, “% Inspection accuracy rate” and “% Policies and procedures established”. Monitoring such KPIs helps the department reach its objectives, and in the end, its mission. 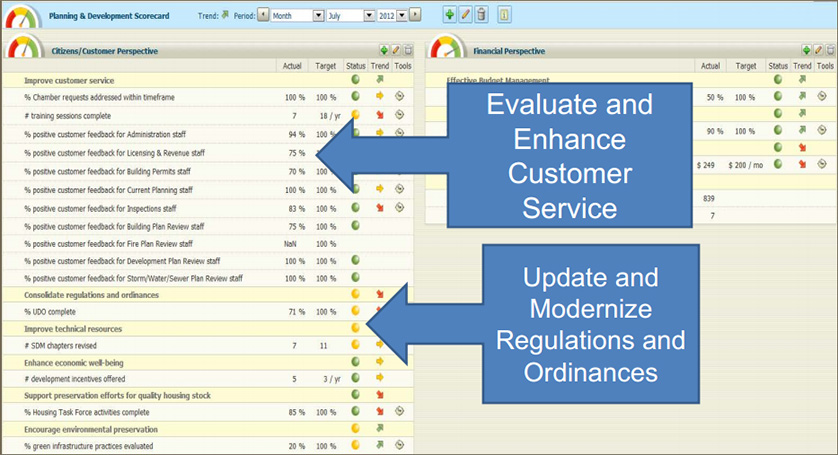 Moreover, the department undertakes a number of initiatives in order to attain its objectives. One of its major initiatives is the Unified Development Ordinance Project, part of the 2030 Unified Plan, which aims at addressing issues such as housing and community development, land use, transportation and public investments, as well as residents’ quality of life. To monitor the extent to which the project progresses as desired, KPIs such as “% UDO complete” are used. In this way, the department wants to make sure both its objectives and projects are properly tracked and acted upon.

Implementing a performance management system can make a difference within the department, and in the end, within the entire company. Operational performance is now seen as a key success driver. Companies have understood the importance of monitoring KPIs and taking actions based on data not only at organizational level, but also at operational level.

Strategy Execution Conference in Oman at a special rate - Save OMR 100!
How to design effective dashboards?