On the one hand, the past decade has seen groundbreaking developments in technology, communications, and science, to name only a few fields. Today we are talking, and beyond that, actually planning outer planetary colonization and possibly even asteroid exploitation missions. Our technology has now travelled far beyond our previously known limits, with Pluto being captured on camera this year, for the first time, after a long 9-year journey.

On the other hand, how are developments going back home? We are all aware of the dangers lurking in the near future for our blue planet but many of us are also aware of the struggles at hand. It might seem fruitless for a few nay-sayers right now, but the shifts we are experiencing right now are nonetheless the results of a prolonged initiative, which will only reveal its outcomes across an extended time-span. It is an extremely intricate and complex process, as it touches on and tries to alter almost every action taken by individuals, communities, populations, organizations, industries, governments etc.

Complexity aside, there is no excuse to refuse involvement, based on the fact that it is a convoluted issue. Technology today affords better tracking of development initiatives across the world. One important player in this struggle for an ideal place to live in, as we think of it, is the United Nations.

In the year 2000 the United Nations, backed up by several world leaders and high-placed public figures around the world, bound themselves to tackle, across a range of 15 years, 8 goals that after completion would improve the overall quality of life in, but not limited to, poverty-stricken nations:

The journey to turn these 8 goals from paper inscribed dreams to a visible, measurable reality has been explained with its ups and downs in The Millennium Development Goals Report, which was just released in 2015. The report comprises proof that through “targeted interventions, sound strategies, adequate resources and political will, even the poorest countries can make dramatic and unprecedented progress.”

Below ensues the complete list of established goals, with focus on the measurable results achieved after 15 years of hard work and successful international cooperation. 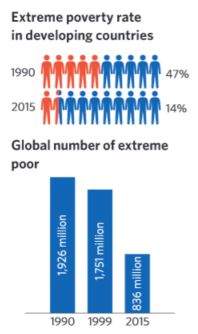 The hardest battle here was fighting not simply poverty, which remains fairly pervasive, but extreme poverty which affects those people who live on $1.25 or less per day. In 1990, almost 50% of the population living in underdeveloped nations suffered from starvation and extreme poverty. Today, that percentage has been reduced to 14%.

This considerable difference is also visible by looking at the influx of middle class workers over the past decade. This societal group has almost tripled in numbers since 1991, when measurements began.

As hunger and poverty are co-dependent, when one improves, the other follows suit, as it is normal. Thus, less people are living their lives with serious undernourishment issues. Translated into percentages, the numbers of starving individuals fell from 23.3% to 12.9%, across 24 years. 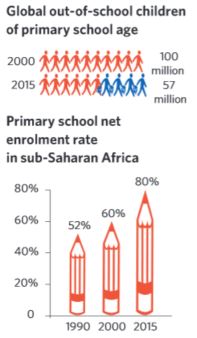 Here there were two challenges which sought immediate attention: the children’s school enrolment rate, and the rate of children dropping out of school, way ahead of term.

The best improvement rates in the educational sector have been registered in the sub-Saharan Africa region.

Globally, the literacy rate has increased up to 91%, as the gap between men and women and their educational status has significantly narrowed down. 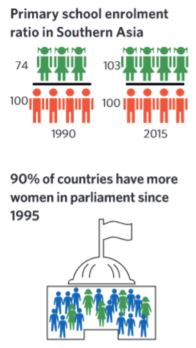 Even though in developed countries, the differences between genders are not as noticeable as they were in the past, in most developing countries, men and women continue to live separate lives, as one group is supported by a patriarchal culture and numerous opportunities, while the other group often faces mistreatment.

However, thanks to the numerous attempts to create a bridge of equality between the two genders, in 2015 there are 103 girls enrolled in schools, to every 100 boys in Southern Asia, as opposed to 74 girls enrolled for the same number of boys, in 1990.

Another step forward is the inclusion of women in parliament, as 90% of the 174 countries have nearly doubled the number of female representatives in parliament, since 1990. 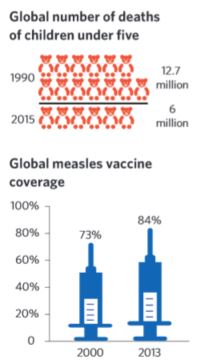 In 1990, there were around 90 deaths per 1,000 births. Today, that number has dropped to 43, not taking into account the considerable increase in population numbers from developing regions.

As more women use contraceptive methods, receive antenatal assistance and specialized health personnel support during childbirth, the maternal mortality rate has dropped by 45%, on a global scale.

Probably the biggest improvement registered in eradicating the HIV/AIDS epidemic, is managing the deliverance of antiretroviral therapy (ART) to 13.6 million people who are living with HIV, as opposed to just 800.000 people who were being treated in 2003.

An estimated of 37 million lives have been saved since 2000, thanks to an extensive campaign of tuberculosis prevention, treatment and intervention. As a direct result, tuberculosis-related deaths have dropped by as much as 45% during the same period. 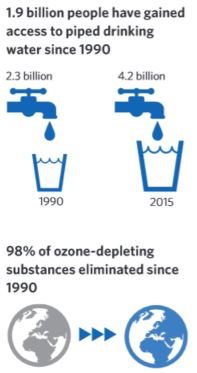 The year 1990 saw a world that lived in darkness and ignorance towards its environment, its inhabitants, its resources and living conditions. Uncontrolled exploitations and industrialization was destroying the ozone layer and the atmosphere, only 8.8% of the equatorial jungles were protected and almost 40% of the global population was living in slums.

Today however, these matters have considerably improved. There is no substance in the air today that continues to deplete the ozone layer, there are three times more protected geographical regions than before, and 91% of the global population has access to drinking water, while only 29.7% of people are still living in slums.

It is only natural that highly developed nations should contribute to help countries which are in the course of development. But the real contribution is more effective when it is performed under a previously discussed program, and not independently. Thus, international unions, like the UN, are born from the need to bring a unifying perspective over what needs to be done, who needs to do it, and how to proceed.

Results speak for themselves, as the assistance given from developed countries increased by as much as 66%, the import/export operations are significantly more efficient, and access to technology is covering the needs of 95% of the global population.

There is no doubt that the road to reaching a desired global development state is still stretching ahead of us, with a long way to go until we can proudly say we have reached the goals of our mission. However, we are on the right track and eventually, we will see it to the end. But until then, we have no excuse to stop for breaks.

The 2015 report acknowledges the results of the first set of global goals, which was agreed upon in 2000. If back then only 8 goals had been set, the following 15 years will see a number of 17 goals hopefully moving from paper, into reality.

Additionally, a global network is taking actions to make these goals known throughout the world, to make them more accessible to contributors, and to point that a global goal is not the problem of one nation’s highest ranking officials, but it’s an entire world’s responsibility.

How to turn workplace stress into an asset
Is the Just-In-Time manufacturing strategy a sovereign, or a misleading system?