Written by Adelina Chelniciuc on July 1, 2010. Posted in Articles, KPI

Several months ago, Ernst & Young Global Media & Entertainment center launched the 6th edition of the ‘Football meets finance study’. In this latest edition the analysts from Ernst & Young are continuing a much debated topic in European football, the media rights and the impact on competitive balance.

According with the Ernst & Young analysts, competitive balance or CB in team sports refers to “the equilibrium of the sporting competition between different leagues of one sport or within a league or competition”.

The importance of competitive balance for team sports, as proved by a multitude of empirical studies comes from the fact that the uncertainty on the match results has a positive impact in the number of spectators coming at stadiums as well as television viewers. An unbalanced competition will have a negative impact on keeping the excitement of the competition at high levels and thus it will not be able to maximize the number of spectators and viewers. This in turn creates a double negative impact both on clubs who will earn less from their tickets sales and TV rights and for the public, as football is one of the most followed sports by people.

In order to determine the level of competitive balance in the five major European Leagues and rank them accordingly by computing an average score, the analysts from Ernst & Young based their study on a set of 7 unique Key Performance Indicators. The indicators analyze:

• # Level of excitement – based both on seasonal and teams components

• # Standard deviation of the top 5 clubs over 15 years

• # Competition for the title

According with the overall ranking that can be viewed in the figure below, Germany has the most balanced football competition, followed at a very close range by France. The football leagues from Spain and Italy trail well behind on the third and fourth spot, while the English football league was the lowest rated. This means that English league is the most unbalanced and predictable in terms of match results expectations. 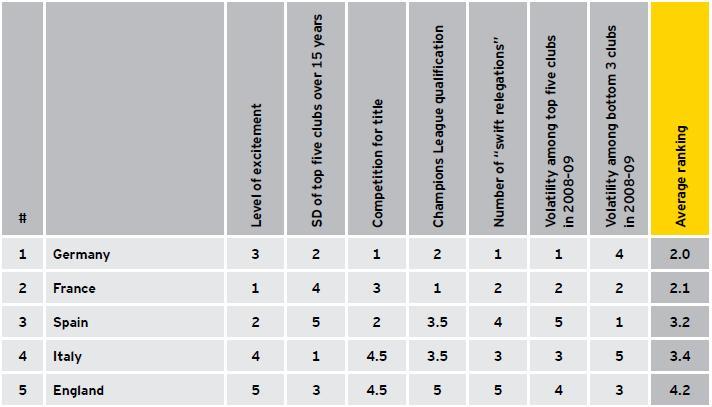 One of the main impact factors for the unbalanced competitions as identified by the Ernst & Young analysts is the growing gap between clubs in terms of their financial earnings.

While top clubs participating in rich competitions such as the UEFA Champions League strengthen their power and achieve more constant results, small clubs become more and more fragile. In this case one solution could be to level up the earnings from European Club Competitions. A step was already taken in this direction by rebranding the UEFA Cup competition in the UEFA Europa League and by increasing the prize money of the competition.

• # Ratio of minimum to maximum revenue within the league 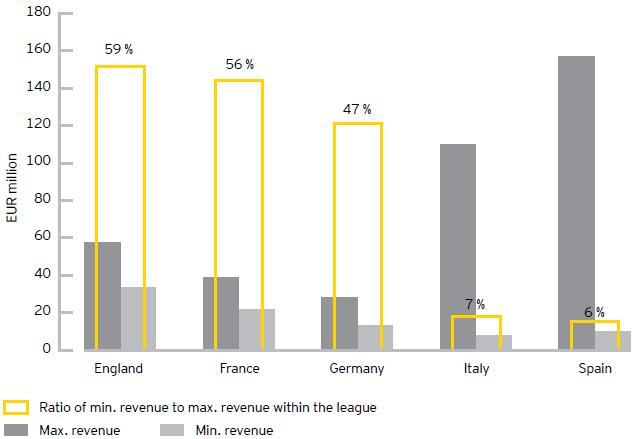 As the graph above shows, England is a special case. While rated as the most unbalanced league, it has the most leveled distribution of earnings for broadcasting rights. This level distribution of earnings is associated with the large amounts of money injected into clubs by their owners, mostly at Premiership level (the name of the first echelon for the English Football League).