Lord King and Colin Marshal, the CEO at the time are credited with transforming the loss-making airline into one of the most profitable airlines in the world. At the time of privatization, the float was 11 times oversubscribed.

The on-time performance stood the test of time for the airline industry. What is special about this KPI is that is affects all perspectives of the Balanced Scorecard, having financial, customer satisfaction and learning consequences.

Today, airlines not only use this KPI, but also make the results public on their websites. An example is Virgin Blue, member of the Virgin Group (a bitter rival of BA in the 80s and later). The latest monthly figures of the on-time performance of Virgin Blue are available on the website of the company, along with the archive of results from 2003 to date. 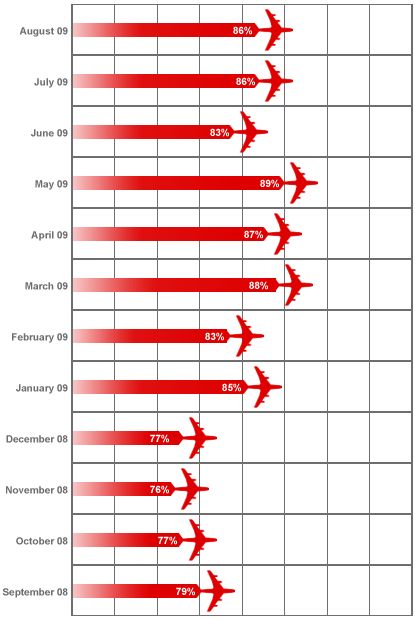 In terms of the measurement method, the website states: “At Virgin Blue we measure our on-time performance as all flights that depart within 15 minutes of their stated departure time. We make no exception for bad weather, air traffic control, delays from suppliers, unscheduled maintenance, consequences of previous delays or anything else for that matter – for us on-time means on-time… no exceptions. All figures are based on pilot flight logs and are internally audited. We have worked hard with Department of Transport and Regional Services and other stakeholders to agree on set of rules for reporting on time performance data and are complying with these. “

Across the Tasman, Pacific Blue is the first airline in New Zealand to make the On-Time Performance results public. The company also requested that the NZ Government make on-time performance reporting mandatory for all airlines operating in NZ.

It appears that On-time performance is a strong contender for a list of the the smartest KPIs used in business.