Written by Denisa Călin on November 17, 2010. Posted in Around the world, Articles, KPI

The Centre for Retail Research recently launched the Global Retail Theft Barometer 2010 report, revealing that total global shrinkage (stock loss from crime or waste expressed as a percentage of retail sales) cost retailers and the public US$ 107.3 billion, equivalent to 1.36% of their retail sales.

The results indicate that the top European country with the highest losses from employee theft is the UK, with 36.8% of product losses, while Austria has the lowest figure (22.7%).

In the U.S., Canada, and Australia employee theft was estimated to be greater than shoplifting losses. In the U.S. for example, employee fraud contributing to 43.7% of shrinkage ($17.2 billion) , while shoplifting for 34.9% ($13.7 billion).

Retailers apprehended 6.2 million store thieves in 2010, with the most stolen items including branded expensive products, such as perfume and fine fragrances, alcohol, cosmetics and skincare.

The Key Performance Indicators used within the 2010 Global Retail Theft Barometer are: 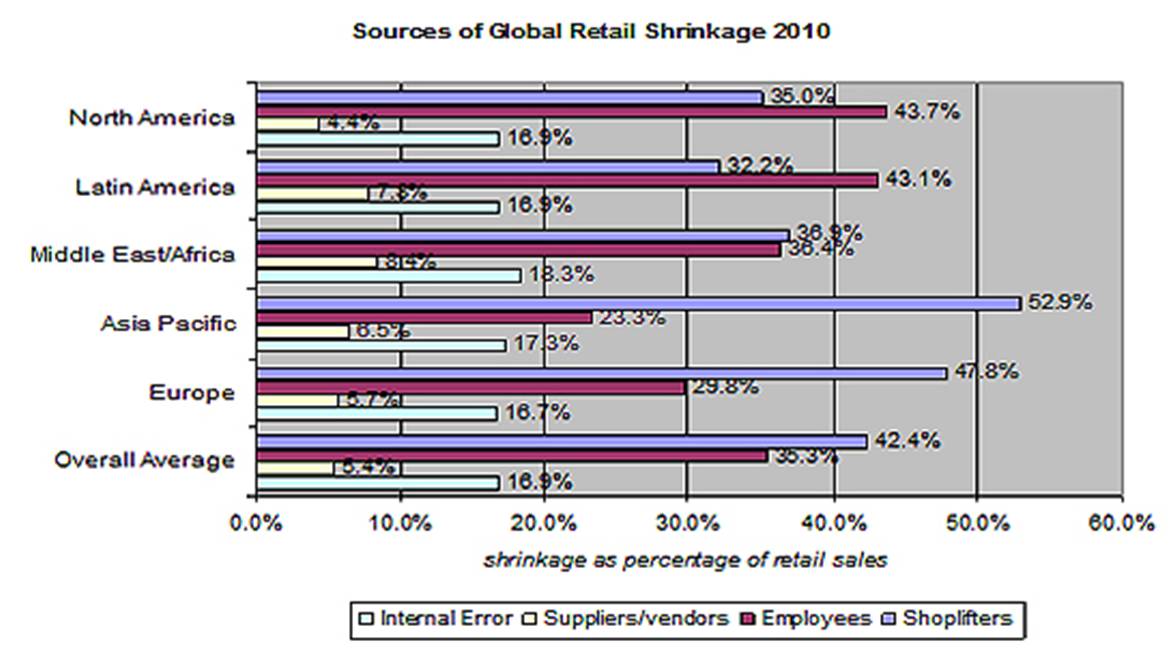 The internal error and administrative failure (e.g. pricing or accounting mistakes) was 16.9% ($18.1 billion), and supplier or vendor theft and fraud was 5.4% of shrinkage ($5.8 billion). Both these totals had improved over the previous year (Centre for Retail Research, 2010).

The 2010 edition of the Global Barometer covers 42 countries, including the U.S., China, Australia, France, Germany, Brazil, UK, South Africa, Turkey, and India, having 1103 respondents from large retail corporations. The report reached its tenth edition, being initiated and compiled by the Centre for Retail Research, originally a university research group, providing authoritative research and analysis of the retail and service sectors in Britain, Europe and globally.