A topic that has been growing in popularity lately is ‘crypto-currencies’, the most common being Bitcoin.

Briefly, they represent a decentralized digital currency enabling low-cost payments, central authorities and issuers not being needed in the process. Peer-to-peer currency system created in open source C++ programming code, Bitcoins can be accessed anywhere in the world if there is an internet connection. The users can store them in digital wallets and can send them to anyone who has a Bitcoin address. Their value fluctuates against other currencies, the conversion to and from being performed at specific online exchange services.

Bitcoin was developed in 2009, based on the work of an anonymous individual or group of individuals going by the name of Satoshi Nakamoto. As of August 2011, more than 7 million Bitcoins were ‘issued’. The resources are limited as an upper limit of units is built into the software: only 21 million Bitcoins can ever be ‘realesed’.

How are they ‘released’?

A good analogy for Bitcoins would be gold. Just like gold, they are valuable because people want them, the supply is limited and they can be created only by ‘mining’ for them. But, as they are mined, the difficulty in mining for them increases. The only ‘difference’ between gold and Bitcoins is that they are not stored in underground vaults but are rather simply entries in a notional ledger held across many computers around the world.

The actual mining of Bitcoins is a purely mathematical process. Another good analogy would that with the search of prime numbers: the small ones were easy to find (interesting fact: the first algorithm for finding prime numbers was produced in Ancient Greece by Eratothenes), but as the process continued, the larger ones were becoming harder to get.

The search for Bitcoins is not exactly one for prime numbers, but for a ‘block’, which is a sequence of data that produces a specific pattern when the Bitcoin ‘hash’ algorithm is applied to the data. When there is a match, a bounty of Bitcoins is obtained (and a fee if the block was used to certify a transaction). The size of the bounty reduces as Bitcoins are mined. Also, the difficulty of the search is increased. These two effects combined, in time, will lead to a reduction of the production rate. When new Bitcoins won’t be produced any more, the only incentive for miners would be transaction fees. 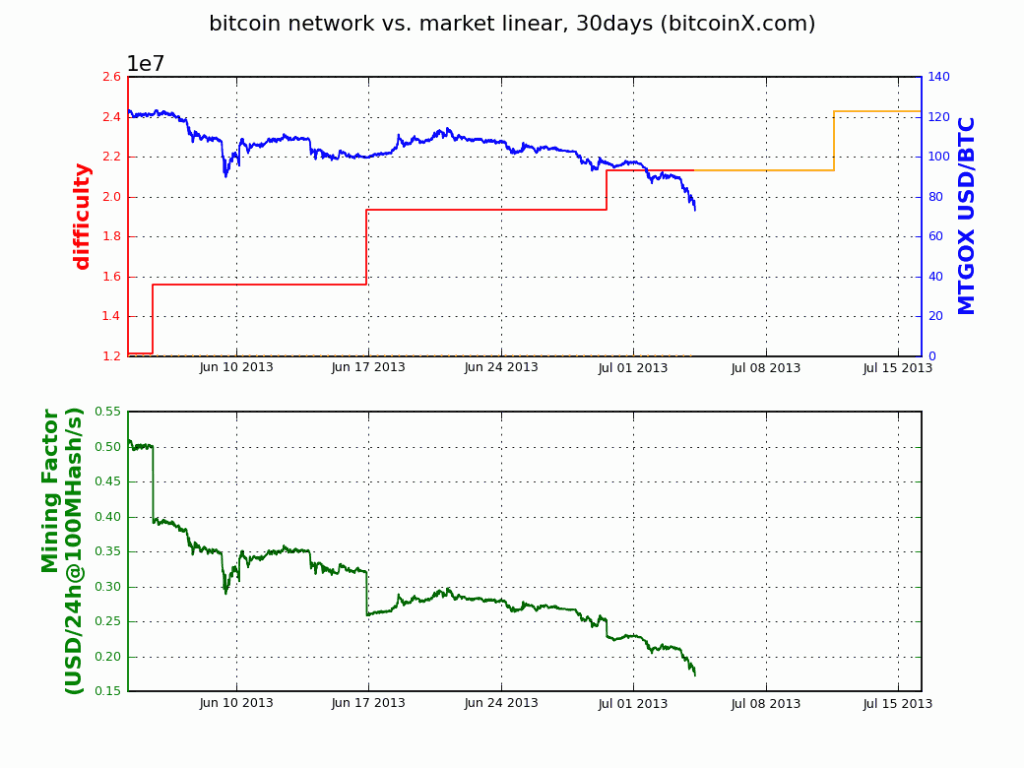 But let’s not get into that right now. The raw performance of a Bitcoin is measured in ‘hashes’ per second (the number of tries per second in order to find a block). With the difficulty and bounty settings you can calculate the expected rate of Bitcoin production. Although an ordinary PC can do this work (using an Intel Core i7 and a regular CPU), allowing you to perform about 6.7 MH’s (6.7 million hashes per second), let’s say that, in order to be profitable, you should have started years ago as today it would have an expected rate of 0.0005 BTC per day. Even if you had a more powerful computer, it would still take you about three years to find a block. For instance, a PC’s GPU that contains a Radeon 7870 chip will do 300 MH /s – enough for 0.02 BTC per day. Also, you should keep in mind the cost of electricity, as you need it in order to run your computer.

Fortunately, there is another way of calculating hashes faster: using Field Programmable Gate Arrays or FPAGs – custom programmable electronics. In this case, the hardware is directly performing the calculations. An FPGA mining rig can achieve a hash rate as high as 800MH/s, but at some expense (the cost can run to $1000 per module). A high rig of 8 modules could be expected to generate 0.5 BTC per day. However, if you invested in FPAGs, your money’s as good as gone, as a new generation of mining hardware is available on the market.

The first dedicated mining rigs bult from ASISc (Application Specific Integrated Circuits – the kind of chips found in cellphones and other electronics) has already been put into use. Avalon claims their product achieves 65 GH/s, using 650 W of electricity. Its price:  ฿72 (yes, it’s in Bitcoins). Butterfly Labs says that theirs will do 50 GH/s (current price: $2499). This means that a block should be found about every 6 days, with a rate of 3.75 BTC per day. So, in 5 days, at the current BTC/USD currency rate, the hardware cost should be amortized in 5 days, more or less.

So, it is quite clear that the ASIC-based Bitcoin mining has brought great development in Bitcoin mining economics. Now, there is a rush to be among the first with the new mining technology and manage to find Bitcoin blocks sooner than anybody else does.

I can’t help but wonder if anybody has thought about using key performance indicators that would help measuring their ‘mining’ performance, keep track of it and make the proper changes in order to improve it. After all, is all about being efficient in this case, right?

Tindell, K. (2013), Geeks love the bitcoin phenomenon like they loved the Internet in 1995