Turkey Tourism – the Collapse of a Famous Titan?

Written by Adelina Acatrinei on January 23, 2017. Posted in Around the world, Trending

In 2014, TripAdvisor, the world’s largest and most popular travelling site, announced that Istanbul is the winner of the Travelers’ Choice Awards for Destination.

A big and somewhat expected success, given the great strategy  implemented by the Ministry of Culture and Tourism of Turkey starting 2003. Climbing 11 places on the leaderboard, 2014 was the year Istanbul surpassed popular cities such as Rome, London or Paris.

Those who were surprised by the new  ranking,  rapidly understood why that happened. Istanbul is a vibrant city which successfully combines the ancient with the modern. It’s full of historic monuments and mosques, but it also has tons of cool restaurants, hip boutiques, and design-savvy boutique hotels that artists, foodies and fashionistas love.

In 2014, Turkey was the state with the 17th largest economy in the world, with a GDP of $820 billion. At that time, Turkey had set an ambitious target to become one of the ten largest economies in the world by 2023, the centenary of the foundation of the Turkish Republic.

That required Turkey to triple its economy to more than $2 trillion, make significant upgrades to its energy, finance, and information technology, and to develop a $500 billion export sector. Unfortunately, the odds were not on Turkey’s side, and the country that welcomed 41 million visitors in 2015 and became the sixth most popular tourist destination in the world, experienced a drop of 40% in 2016. 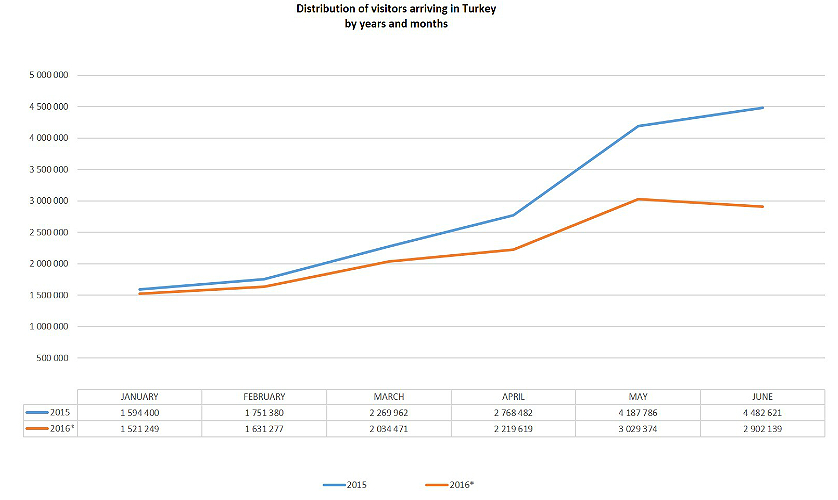 The decline of the tourism industry has also coincided with a period of growing rancor between Turkey and other world powers. A diplomatic crisis erupted in November 2015, when the military shot down a Russian fighter jet along the Syrian border. In that moment, the President of Russia, Vladimir Putin, imposed sanctions on Turkey, known as a very popular destination for Russian people, thus hampering economic ties and tourism.

Terrorism and political instability has triggered a switch for the country that spreads over two continents. For a long time, Turkey represented an area of stability between Europe and the Middle East.

Now it is facing a long period of high tension, caught between the fight against Kurdish militants in the East and the fight to prevent the spread of violence in Syria. Ankara sees the Kurdish militants as the main threat to the state, but the attacks also come from the terrorists of the Islamic State.

Turkey was involved in a conflict on two fronts: one on the inside of the country and one across the border, in Syria. The Government of Ankara has led for decades an internal war with the PKK, considered a terrorist group by Turkey and by the West.

For two years everything seemed to be quiet, but this period of relative calm ended in July 2015 after the murder of 32 young Kurdish activists, in the city of Suruc,  southeast of Turkey. The target, apparently an ISIS militant, planned to go to northern Syria to help rebuild Koban, a city devastated by the jihadist group. That was a clear sign of the extension of the Syrian conflict on Turkey.

After a wave of attacks and counter attacks from the army, PKK accused the authorities of wishing ISIS’s victory, and the end of the control of the Kurds in parts of Syria and Iraq. For PKK, the targets were the government and military objectives southeast of the country. But TAK is a more radical group, its attacks are more violent, and its aims are the busiest cities: Ankara and Istanbul.

Turkey was caught in  the Syrian conflict and President Recep Erdogan was one of the first leaders who requested the removal of Bashar al-Assad, the leader of Damascus. Meanwhile, Ankara has increasingly become concerned with the attempts from the Kurdish groups to take control of the northern parts of Syria, fearing the increasing influence of the People’s Protection Units (YPG) and the Kurdish Democratic Union Party (PYD).

In 2014, three regions were declared autonomous and in 2015, YPG took over  the control on the border of Syria with Turkey, on a stretch of almost 400 kilometers. When Russia intervened in the Syrian conflict, in September last year, the Kurds from Syria, together with the Syrian army and the Russian allies, advanced and won territories north of Aleppo.

Over the time, the Turkish army intervened in politics, seeing itself as the protector of the country’s secularism and democracy. This is how they explained the four military coups since 1960. The military has had tensions with Mr. Erdogan’s Justice and Development Party (AKP) over its brand of political Islamism.

Regarding the last coup, the government of Turkey has blamed Fethullah Gulen, a very powerful US-based Muslim cleric, of instigating unrest. As a response, Mr. Gulen publicly denied the accusations and condemned the coup.

A quirky fact is that after the coup attempt, many soldiers have affirmed that they have been told they were taking part in military exercises and did not know a coup was being in progress. Meanwhile, the government of Turkey has since arrested over 6000 people, including high-ranking judges and soldiers and is to this day conducting investigations.

Economists are worried that tourism revenues will drop to a quarter this year, which will cost Turkey about eight billion dollars, and will erase more than half a point of the country’s economic growth.

However, given that last year’s tourism was responsible for half of the current account earnings, the decrease in visitors will create problems for Central Bank’s objective to reduce the deficit from the alarming 4.5% of GDP recorded in 2015.

The Turkish authorities have announced a plan aiming to offer emergency support to the tourism sector, which includes a grant of 255 million pounds (87 million dollars) and a feature that allows tourism companies to restructure their debts. It is not clear yet what will be the impact of these measures.