The performance of an English railway company

In 2002, when the company took over the railway network, the infrastructure was poor and lacked investments. Nowadays however, it managed to progress a lot, making the railway much safer and efficient. Just to have an overview, the company managed to reduce delay minutes from 14.72 million per year (in 2002), to 7.4 million (in 2011).

How does the company manage its performance? First of all, it has a clear focus on safety – passenger safety, workforce safety and public safety. For 2014, the safety related KPIs had improved results:

– # Passenger safety, measured as passenger fatalities and weighted injuries normalized per million passenger kilometers, was 0.194 against the target of 0.240;

– # Workforce safety, measured as workforce fatalities and weighted injuries normalized per million employee hours, was 0.161 against the target of 0.090.

In what concerns public safety, there were 18 adult accidental fatalities and 286 suicides on the railways. The risk associated with level crossings was reduced by 10.49 %.

By 2019, the company aims to reduce the risk at level crossings by 25%, to reduce the train accident risk by half, and to eliminate all fatalities and major injuries among the workforce and the contractors.

Further on, Network rail focuses on reducing risks. It has developed an Enterprise Risk Management framework that provides a standardized approach to the identification, assessment and reporting of major risks. Therefore, each risk is addressed through clear actions, meant to prevent or, at least, reduce it.

For example, to reduce the risk of public injuries and loss of lives on the railways, 804 level crossings were closed, and national TV and advertising campaigns were conducted. Future steps are to invest more than £ 100 million to improve safety, and to reduce the level crossing safety risk by 25%.

As a result of all these efforts towards safety and risk management, the company’s performance increased:

–  % Public performance measure (PPM), measured as percentage of trains arriving at their terminating station on time, was 90.7%  for the period 1-28 February 2015, compared to the same period of the previous year, when the level was 87.2%;

– % Right-time performance, measured as percentage of trains arriving at their terminating station early or within 59 seconds of schedule, was at 67%, for the period 2014-2015;

The results presented above represent the total national performance. Each KPI has breakdown results for all operators. The efforts put into the above presented methodology, process related KPIs, lead to increased results for customer related KPIs:

– % Passenger satisfaction, measured through surveys on persons travelling by train, was at 83% in 2013;

– % Customer satisfaction, measured through surveys on the top managers from the train and freight operators in the UK, was at 58% in 2013.

The table below briefly describes the performance achieved in 2014: 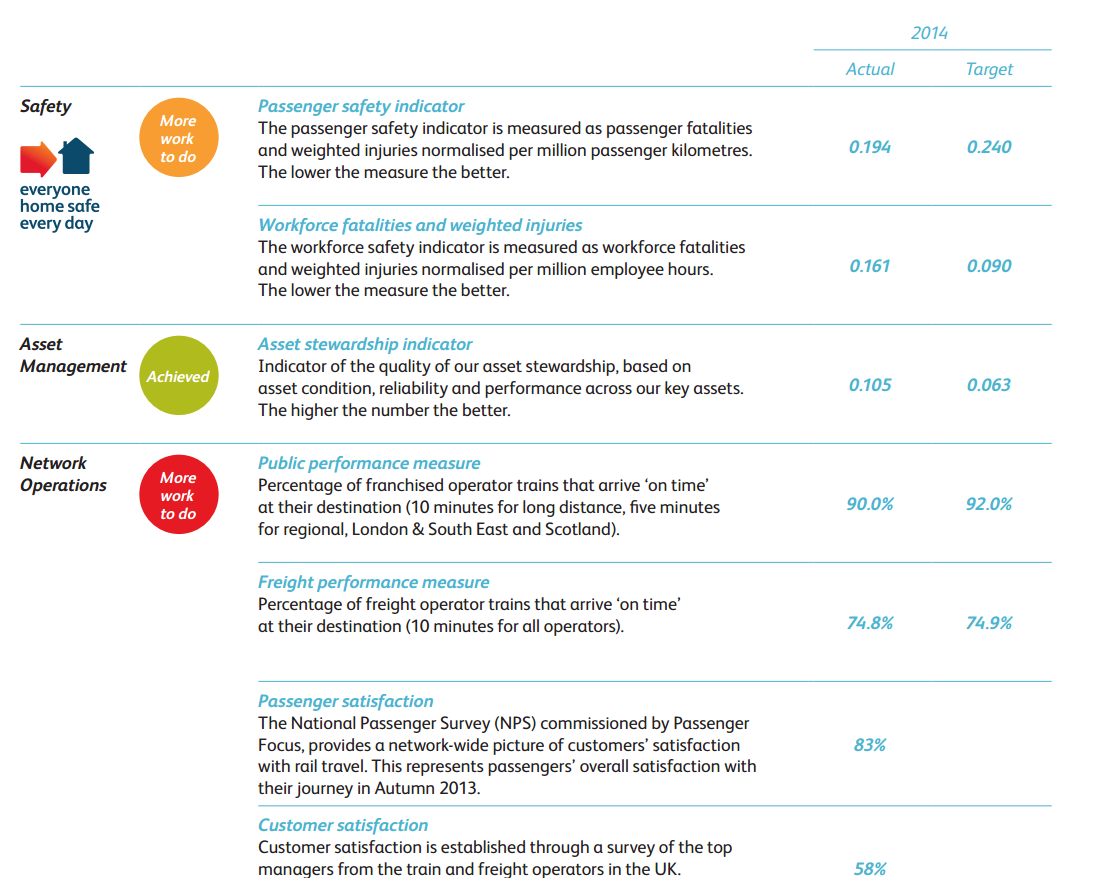 Network rail is not the only company in the field measuring its performance from the desire of improving the services it delivers to its passengers. Canadian Pacific Railways is another example.

To discover more railways related KPIs, you can access Railways KPIs section from our website, where indicators are available in the areas: railway infrastructure quality, network size and density, network development and improvement capabilities and efficiency.

Towards a cloudy future: predictions for digital business developments
The ups and downs of transboundary crisis management