Written by Andreea Vecerdea on May 21, 2015. Posted in Around the world, Articles, Trending

How do we know that our government is performing well? Who evaluates its results? These are questions that have recently arisen in Pakistan, where the federal government is evaluated against a series of Key Performance Indicators (KPIs).

The Performance Management Framework which is structured on 25 KPIs was developed by the Pakistan Institute of Legislative Development and Transparency (PILDAT), an independent, not-for-profit authority that strives to “strengthen democracy and democratic institutions in Pakistan.” The main objective is to understand the areas where actions are required to be taken so that the quality of the democracy in Pakistan can progress further, and the federal authorities can provide their citizens with good governance.

The 25 KPIs used to monitor performance cover all the important areas a Government should be looking at, starting from disaster preparedness and management, to tax collection and investments, education and health, transparency and poverty alleviation. The entire Scorecard can be seen below, as it is provided by the Pakistan Institute of Legislative Development and Transparency (PILDAT): 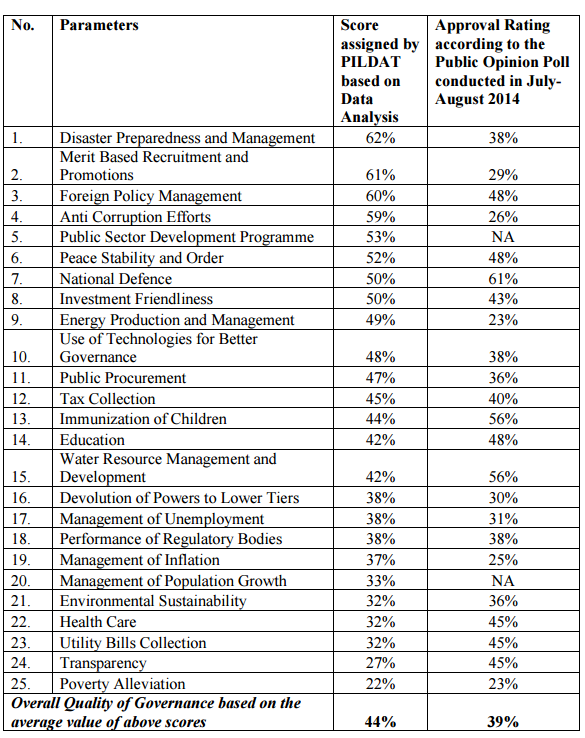 The overall score achieved in terms of governance quality was 44%. The areas with the highest results were disaster preparedness and management, which scored 62%, merit based recruitments and promotions, which achieved 61%, and foreign policy management, where the result was 60%. On the other hand, the areas with the lowest results were poverty alleviation, which barely achieved 22%, and transparency with 27%.

Compared to the results obtained in the 2012-2013 period, the progress was as follows:

In the report dedicated to communicating the Scorecard results, each of the above mentioned KPIs is further analyzed in details.

Interesting to note that these results required by PILDAT, and provided by the Government, were compared to the results obtained through the Public Opinion Poll conducted by PILDAT within the July-August 2014 timeframe and, in the majority of cases, citizens’ perception of performance was lower than the actual results. To be more precise, for 13 out of 25 KPIs, citizens awarded lower scores, for one KPI the result was the same and, in 2 cases, the results from the public were not made available. This led to a governance quality average of 39% scored in the poll, lower than the 44% result reported by the Government.

This discrepancy between perception and reality is not new. It is something common for companies too, where clients sometimes have a certain opinion about the organization, which may differ from the one the results show. This is usually caused by a lack of transparency, which can be improved by communicating performance results more often, more visibly, so that clients get to know them. This case also stands for Governments. They need to communicate their directions and the actions taken to achieve those directions more clearly, so that citizens know them.

The performance evaluation of the Federal Government of Pakistan did not resume to the overall results obtained at Federal Governmental level. Results were analyzed in details, for each of the 4 provinces: Balochistan, Khyber Pakhtunkhwa, Punjab and Sindh.

In this case, results were as follows: Punjab – with 42%, Khyber Pakhtunkhwa – with 37% and Balochistan and Sindh, both of them with 34%. In the table below, the comparison across the 4 provinces can be clearly seen: 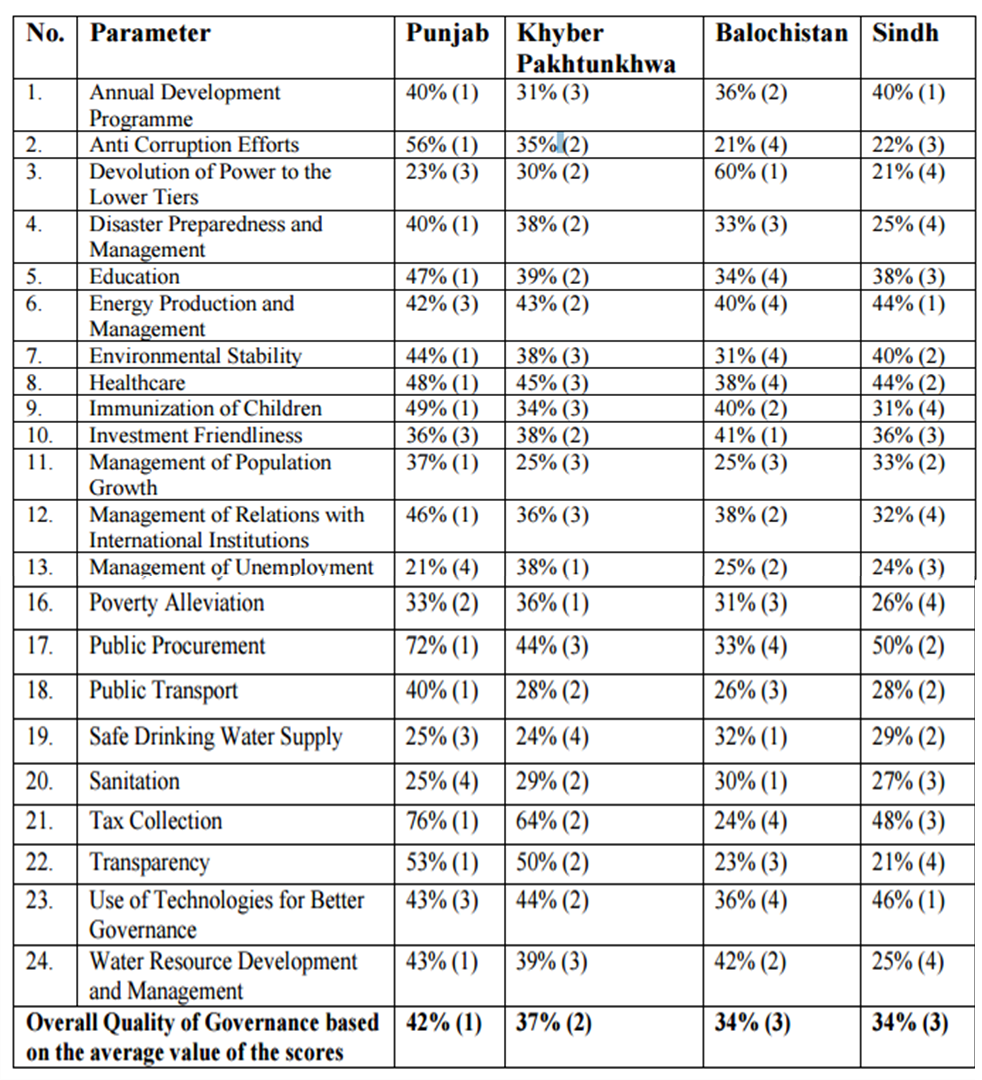 When it comes to comparing actual results obtained in the ranking provided by the poll, the situation is more or less the same as in the case of the Federal Government. For Khyber Pakhtunkhwa and Sindh, citizens evaluated the performance lower than the actual result, while for Punjab and Balochistan, the situation was the other way round – the public provided higher ranks than the results actually achieved.

One last aspect to mention is that the goal of these evaluations and comparisons was not to criticize performance, as this is not the objective of any Performance Management System. Its role is to identify areas where improvement is needed, and take actions to achieve better results in the future.

The Federal Government of Pakistan understood this and it has been striving to provide its citizens with increased quality in the way it delivers its services and it manages to implement democracy across the state.