Written by Andreea Vecerdea on December 29, 2014. Posted in Around the world, Articles, Strategy, Trending

Over the past 20 years, Dubai has experienced an incredible growth which transformed the city into one of the world’s most important economic centers. The Dubai Strategic Plan 2015, launched in 2007, set the premises of a sustainable growth with a long-term strategy.

Dubai’s 5 priorities at that time were economic development, social development, security, justice and safety, infrastructure, land and environment, and government excellence. As the plan was reaching its end, the Government started work at a new plan, the Dubai Strategic Plan 2021.

The new plan was developed to reinforce Dubai as a global center, with its recent initiatives in mind: winning the right to host World Expo 2020, converting the city into the capital of the Islamic economy, and launching Dubai Smart City.

2014 was a year of analysis, interviews, meetings and workshops designed to establish the objectives for the next period as well as the Key Performance Indicators (KPIs) needed to measure the progress towards meeting the targets set.

Benchmarking was used in order to assess areas of excellence in Singapore, London, New York, Barcelona, Melbourne and Hong Kong and to compare Dubai’s performance in the same areas. Thus, the sectors where improvement was needed were identified. Also, digital brainstorming sessions were conducted to engage the entire society in the Plan’s development.

The stakeholders involved in the process of developing the 2021 Plan came both from the public and from the private sector, as well as from the ordinary citizens, the focus being on collecting an accurate feedback and gathering ideas on the future priorities of the city from a complex perspective.

In the figure below, the entire process is described in more details:

The result of all these efforts was materialized in December, when the plan was launched. The 2021 priorities are:

– The people – they are the force that can drive the city in the future; a city without happy and empowered citizens cannot survive;

– The society – Dubai’s multicultural society has to learn how to continue to maintain its diversity, but integrating it into a cohesive society, where people understand what tolerance and respect mean;

– The experience – Dubai aims to become “the preferred place to live, work and visit”; for this to happen, it has to ensure its residents a high quality educational and health system and, to its tourists,  a full cultural and entertaining experience;

– The place – Dubai strives to have an appropriate infrastructure that allows easy access to all services for its residents and tourists and to smartly exploit the energy sources available;

– The economy – becoming one of the 5 centers for trade, finance and tourism is one of Dubai’s goals for the next period;

– The Government – the key for ensuring reliable services to citizens is having the Government work for the people and not against them, with transparent and efficient measures taken at the right moment.

For each of these areas, aims and KPIs have been set to measure the extent to which objectives are reached. For example, in what concerns the Government area, 3 aims were established:

– To be proactive and creative in meeting the needs of individuals and society as a whole;

– To act sustainable and innovative in the management of its resources;

– To be transparent and reliable.

For each of these aims, further details are provided to explain more specifically how these aims will be attained. Also, a set of KPIs keep track of the results obtained. 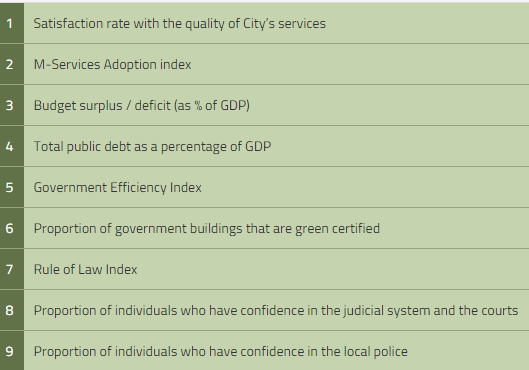 With such an approach towards the future, with objectives set based on extensive analysis, with KPIs set to measure progress and with a clear direction of what has to be done in which area, Dubai will definitely head towards reaching its vision.

Dubai ruler, Sheikh Mohammed bin Rashid Al Maktoum, is aware of the fact that the future is full of opportunities and challenges, “but facing the future with positive energy will always ensure the best. We will thoroughly monitor the plan’s implementation and measure the workflow through a set of KPI’s along the six main pillars.”

What has 2014 taught us?
Christmas shopping – the annual run for performance