Written by Andrei Costea on April 23, 2021. Posted in Around the world

As the world was reeling from the 2008 financial crisis, 3 years later Egypt became engulfed in regional turmoil as well, since the Arab Spring came to its land as well.

Anti-governmental protesters wanted reform, desired change, and fought to remove the then leader – Hosni Mubarak, with someone who will lead the nation on a better path. While there was an initial bump with the Muslim Brotherhood and Mohamed Morsi coming to power, eventually it all started to settle down after the latter’s overthrow in 2013.

Following the anti-governmental coup d’état that ensued, in 2014 Abdel Fattah Al-Sisi won the elections and became the country’s leader, vowing to bring it back on the road to stability, reconstruction, and glory.

While all this was going on, Egypt’s economy managed to remain relatively robust, relatively being the keyword there. Private consumption and buoyant government expenditures kept the country’s finances in check for a while, however, it was not a sustainable method of maintaining an economy.

With President Al-Sisi moving forward with increasing government spending in order to prop up the economy, budget deficits crept up day in, day out. Soon, the government realized that it had to change its modus operandi, otherwise it would drive the country into the ground, economically. This led it to develop the Sustainable Development Strategy: Egypt Vision 2030.

The SDS was a two-fold plan. On the one side, it had to address the ever-present economic woes. On the other, it strived to adhere to the UN’s SDGs, in order to improve the livelihood of its citizens and bring the nation back to a state of normalcy and afterward, improvement and growth.

Through a 3-year Extended Fund Facility (EFF) from the IMF, of around $12 billion US dollars, Al-Sisi’s government began addressing key imbalances within the economy, specifically its growing fiscal deficit.

Prior to receiving the EFF, the government had already begun working on these issues, through a few measures which included substantial reductions in fuel subsidies and the liberalization of the exchange rate regime.

Once the EFF was granted, the administration looked to substitute its sales tax system with a comprehensive VAT system, with a negative list approach towards certain products and services, which was the exact opposite of its old policy. On top of this, it also increased a few VAT rates.

Moreover, following the reduction in fuel subsidies was a reduction in electricity and utility subsidies, as well as a restructuring of the food subsidy system to better target recipients. In addition to this, the government passed a new civil service law, which restructured wages, accounted for growth control, and linked public servants’ performance to their compensation.

As a result of these measures and a few others, the country’s budget deficit took a healthy dip downwards and is expected to continue its trend all the way to 2030.

Accompanying these policies was another key feature of its economic reform, namely the introduction of a flexible exchange market and increased foreign exchange availability.

Once confidence was restored in the Central Bank of Egypt’s proceedings, it relaxed all foreign exchange transaction restrictions, capped government borrowing, and began raising policy interest rates on its domestic currency, to restrain dollarization.

With great economic and political change comes great demand for measurement. With this in mind, the country prioritizes all public investment decisions to projects that bring sustainable development on multiple fronts.

Instead of trying to maintain one healthy link at a time, it has embarked on a multitasking endeavour, only looking to strengthen those areas that bring several benefits at once, almost as a package deal.

The Ministry of Planning, Monitoring, and Administrative Reform has developed an integrated electronic system for planning & monitoring, that ensures each project’s compliance with the several existing criteria of sustainability.

The system links all projects submitted by public entities to the goals and KPIs of the SDS, which in turn helps with monitoring & evaluation (M&E). Through this link, a project’s progress and performance are evaluated based on the added benefit they bring to the nation’s goals and according to the degree of achievement surrounding balanced regional development.

Furthermore, Al-Sisi’s administration has transformed the state’s budgeting system from a line-item budget type to a performance-based budgeting system. This will more closely match expenses and investments to goals and KPIs.

All ministries that receive any finances from the state budget underwent several training sessions, workshops, and consultations to ensure that their members are fully knowledgeable when it comes to handling the new system.

To top things off, the country’s Central Agency for Public Mobilization and Statistics (CAPMAS), a member of the Inter-agency and Expert Group on SDG Indicators (IAEG-SDGs), monitors all aspects related to Egypt’s SDGs and SDS, through its sustainable development unit (SDU).

The first one was released in 2018, outlining its classification of sustainable development goals into 3 tiers, prescribed by the global indicator framework, on the basis of their level of methodological development and the availability of data. 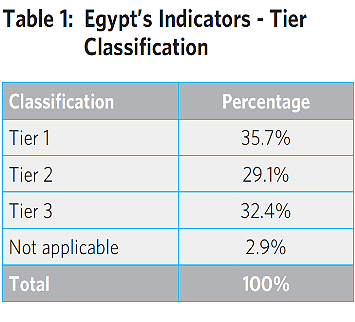 Building upon all of these measurement systems, the state also created the Tafael project (in translation: Activation), which measures KPIs at the governorate level.

Since measuring indicators at the national level does not truly reveal underlying issues at the regional one, the government has decided it needs to go deeper and seek out the problem at its root, instead of simply glossing over challenges superficially from a national point of view.

The Tafael project will collect data at the municipal level, by actively requesting it from each municipality. This not only spurs data collection but data creation and management at a much more integrated level.

Sustainable Development Goals – How do they square up?

At current, Egypt is locked to work on 17 SDGs. Each goal has the following constitutive elements:

This field has 4 values: 0 for general indicators (neither SDG, nor SDS), 1 for SDGs, 2 for SDS, and 3 for indicators commonly used in both.

Knowing all of this, we can take a look at some of the SDGs that Al-Sisi’s government has begun working on.

Between 2012 – 2013, the national poverty line was 26.3%. In 2015, it rose to 27.8%. Recognizing that this will become an issue if not taken care of in time, the government instituted two critical policies, Takaful (Solidarity) and Karama (Dignity).

Takaful represented a monthly conditional cash transfer for households with children, aimed at promoting capital accumulation, by providing families with income support, while offering them incentives to invest into their children’s health, education, and nutrition.

Takaful was accompanied by several conditions to ensure the state’s goodwill will not be abused, such as enrolment of children in schools with a minimum of 80% attendance and mandatory health check-ups – which included immunization and growth monitoring for kids aged 0-5.

Karama represented an unconditional cash transfer program that promoted social inclusion by supporting the livelihood of the elderly, those with disabilities, and orphans.

Egypt’s SDS paves the way for the necessary reforms to the country’s educational system, by dividing it into 3 levels – general education, technical education, and higher education, and developing policies, measurements, and indicators for each in part.

Egypt has the greatest mass of individuals enrolled in its education system, in the MENA region, with approximately 20 million students enrolled only in pre-tertiary education.

One way in which the administration will approach its educational reform will be to restructure the teachers’ payment scheme, to match their qualifications.

Moreover, it will introduce skill-development training programs, to boost their training capabilities. In addition, it will also look to deploy more modern teaching technology, so that a student’s learning experience remains relevant to what they’ll encounter once they reach the job market.

This is one of the areas in which the aforementioned economic and measurement changes will have the most impact, as whenever shortages appear in a government’s development plan, there always seem to be loopholes surrounding infrastructure.

However, that is not the case in Egypt. According to its SDS, four new major industrial zones have been established over the past 5 years, with a total of 1,020 production units.

Additionally, the administration has laid out a plan to develop the Golden Triangle economic area in Upper Egypt, which will be an industrial zone, housing mining-based projects, logistics projects, and environmentally-friendly tourism projects.

While Egypt suffered quite the rough start in 2011, after a period of seemingly unrelenting turmoil, the country has since turned things around and is now looking to be a shining beacon, an example of best practice when it comes to country development post-uprising.

While the events of the past were a most unfortunate occurrence, we may view them nowadays as a necessary step towards progress, improved livelihoods, change, and the overall betterment of society.

Egypt may have suffered in the past, but now it is looking like it’s sailing at full mast and is prone to becoming one of the more interesting development stories of the 21st century.