Performance Magazine > Around the world > The ride for performance – Portland Streetcar

The ride for performance – Portland Streetcar

Written by Andreea Vecerdea on May 9, 2018. Posted in Around the world

Public transportation is one of the key challenges each city needs to address, in order to provide the proper infrastructure for its citizens.

Way back in December 2014, the Office of the City Auditor released a report that reviews the effectiveness of the Performance Management system used by the Portland Bureau of Transportation (PBOT) to achieve the city’s goals for Portland Streetcar.

According to this report, the first problem identified was the lack of a rigorous reporting on KPIs: “PBOT did not report results for five measures” and “[…] four performance measures were either unreliable, unsupported, invalid, or overstated, and underwent limited scrutiny by PBOT”.

Data reporting is, indeed, one of the biggest challenges in working with KPIs. If one selects KPIs, but does not activate them, this means that those KPIs remain only at a paper level, they do not effectively exist for that organization and they bring no value. If a KPI does not provide data, its role is in vain.

The main goal for Portland Streetcar is to “deliver safe, reliable and cost-effective transit services”. However, the results of the audit show little performance in this area, as it can be seen in the below table: 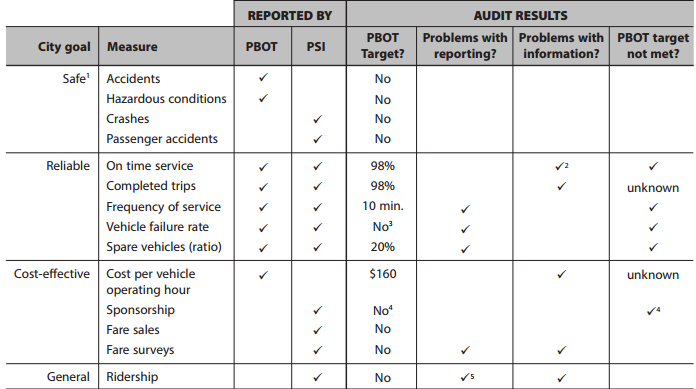 A lack of standards can be noticed in what concerns the Performance Management terminology used. Goals are expressed as nouns, and measures’ names are not standardized and clear.

Another issue that can be identified is the lack of targets for some of the KPIs. How can one expect performance improvement, if there is no target set? Targets are the quantifiable expression of the performance desired in a certain area. The achieved results can then be compared to the target, and decisions can be made to address underperformance, or to reward excellent results.

The report ends with a series of recommendations, meant at solving the problems identified and increasing performance. They refer to:

As an answer to these recommendations, Portland Transportation’s Director wrote a memo, where she appreciates and takes into consideration some of the suggestions, while respectfully disagrees with others.

However, the Audit achieved its goal: it brought into attention some problems of the Performance Management System and proposed certain solutions. From this point, the System needs to be refined by the ones involved in its maintenance and roll-out.

An important aspect remains in mind: Performance Management is neither simply, nor easy to implement, maintain and update.