In the strive to offer citizens access to high quality, but still affordable services, hospitals are continuously seeking to improve their offerings in terms of value for money. More and more medical facilities nowadays have implemented Key Performance Indicators (KPIs) in order to reflect progress towards achieving their goals.

The Commonwealth Fund, a U.S. based private foundation aiming at promoting a high performing healthcare system, has recently released a scorecard to reflect State health system performance. In comparison to previous performance results, when only 37 KPIs were monitored, the 2014 report assesses the performance of hospitals based on 42 indicators of healthcare access, quality, costs and outcomes, for the period 2007–2012.

Findings show that there is a consistent geographic disparity in what concerns the performance of the state healthcare systems, mostly because of the differences existing at health policy levels and funding. By comparing state results to the ones of the top performing states, improvement is triggered. Benchmarking puts pressure on achieving higher performances. 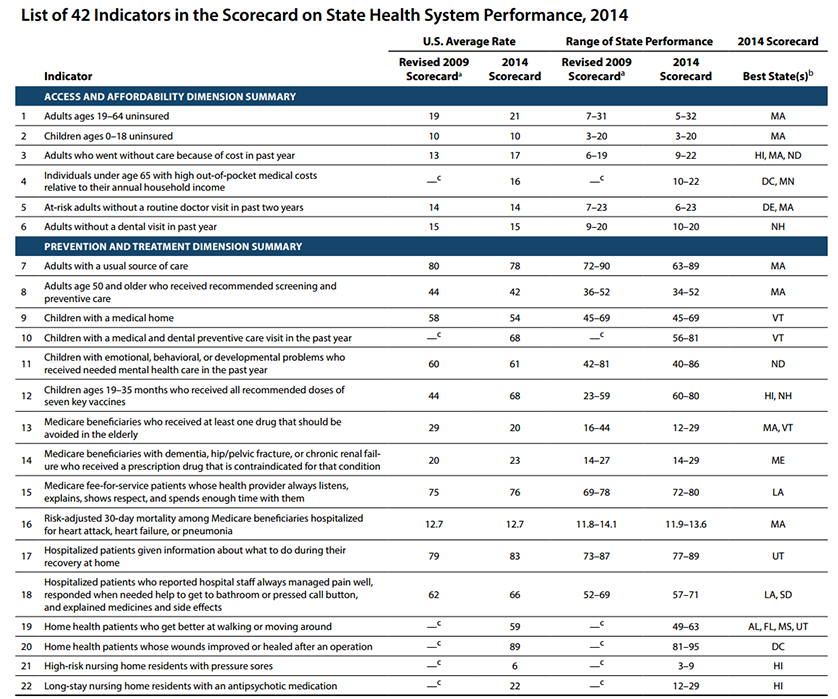 In the above presented scorecard, the KPIs are grouped in 4 clusters. The first one, Access and affordability, includes indicators designed to show the extent to which both children and adults benefit from care services, and the frequency of medical checks. The second cluster, Prevention and treatment, and the third one, Avoidable hospital use and cost, mostly comprise of KPIs that assess hospital performance, by looking at the health state of the patients who were hospitalized, released and readmitted. The last cluster, Healthy lives, contains indicators that offer an overview of the nation’s health state, reporting KPIs such as: suicides, cancer, obesity mortality and smoking rates.

Besides the 4 clusters from the Scorecard, there is another dimension which is being monitored, the one related to equity. Here are included KPIs that concern patient income level, their race and ethnicity.

Although the state has conducted sustained efforts over time, results are still not at the desired levels. For the majority of the KPIs, a stagnation was registered, and for some of them, even a decline.  Nonetheless, the report mentions that “improvements uncovered in the Scorecard are not as widespread as Americans should expect, given the high level of resources the nation devotes to healthcare.”

The main learning point is that performance can be achieved if coordinated efforts are conducted. Thus, higher results were obtained when policymakers and health system leaders worked together on different programs: children immunization rates and hospital quality increased, while hospital readmissions reduced.

One of the benefits of using KPIs to report performance is the chance of spotting opportunities for further development. States with a poor performance should learn from the ones with a higher performance and be open to change. Flexibility is a must in achieving performance. Innovation and health system reforms are needed to achieve a significant progress, reduce performance gaps between states and obtain better results.

The Affordable Care Act is such an example of a health system reform in the area of insurance coverage. It puts citizens in charge of their healthcare, thus offering them flexibility to make informed choices, and better protecting them. First results can already be seen, as data shows that the reform led to lower hospital readmission rates.