Written by Andrea Minelli on July 22, 2020. Posted in Around the world

Located in the heart of South East Asia, The Federal Constitutional Monarchy of Malaysia has experienced a steady economic growth during the past 20 years. After the Asian financial crisis of 1997-1998, Malaysia continued to post solid growth rates, averaging 5.5% per year in the 2000-2008 period. The country was harshly hit by the Global Financial Crisis of 2008-2009, but fully recovered, to pre-crisis level, posting growth rates averaging 6% since 2010 till 2017.

The major highlights of the Malaysian economy have been its ability to transit from an economy dominated by the production of raw natural resources during the 1980s, to becoming a leading exporter of electrical appliances and natural gas, as well as implementing initiatives aimed at reducing household income disparities, which remains higher relative to other East Asian countries.

Despite years of performance management activities, combined with and project coordination in public sector, Malaysia’s productivity growth has performed below standards with respect to its regional competition. As a result of this underperformance, the government decided to employ KPIs as a tool to enhance public sector performance and productivity.

Malaysia’s PEMANDU and the NTP

PEMANDU, an in-house private consultancy firm, has been set up by the Malaysian government to support the implementation of Malaysia’s National Transformation Program (NTP) which aimed to modernize government operations in the public sector, improving citizens livelihood and attractiveness of private investments both from foreign and domestic investors into Malaysia.

The government expected, with the implementation of the plan, to set the right conditions that would turn Malaysia into a globally competitive high-income country by 2020. Overall, during the first six years of implementation, noticeable results have been achieved in terms of reducing the fiscal deficit by 55%, creating more than 2.25 million jobs and building more than 6,000 km of rural road. These outcomes will be analyzed in more details in the following chapter.

The structure of the overall program was created in accordance to the strategic objective of ensuring a transition to a “High-Income Nation” focusing on 7 public areas of interest, named National Key Results Areas (NKRA), serving the purpose of creating both short and long-term initiatives in order to improve these high-impact areas. For each area of interest, a minister was appointed to lead the mission of fulfilling the objectives of the NKRA through clustered KPIs.

To ensure success and tangible outcomes for each KRAs, PEMANDU organized a series of “Labs” aimed at training public service employees working across each target area and ensuring effective and efficient problem-solving skills.  The GTP appointed seven target areas that focus on the following matters.

To prioritize the sectors of the Malaysian economy that had a comparative advantage as “hotspots” for national and international investments, the ETP classified 12 National Key Economic Areas (NKEA’s) ranging from Oil, Gas and Energy, to Agriculture, Tourism and Healthcare. To increase the ease of doing business and creating a more competitive environment for companies operating in the NKEA’s, the Economic Transformation Program introduced six Strategic Reform Initiatives (SRIs) formulated under 37 individual policies approved by the National Economic Advisory Council.

Since 2009, PERMANDU has been responsible in overseeing the implementation and assessing the progress of the GTP & ETP, facilitating the achievement of NKRA and NKEA objectives, under the guidance of the PM’s vision and motto – “People First, Performance Now”. During its seventh year of implementation, Malaysia has been able to record noticeable performance improvement towards the NTP goals which were achieved 90% or higher in all the key results area. As published in the 2015 Annual Report, most of the NKRA/NKEA/SRI composite scoring have out-performed its own associated targets, as in the following cases: 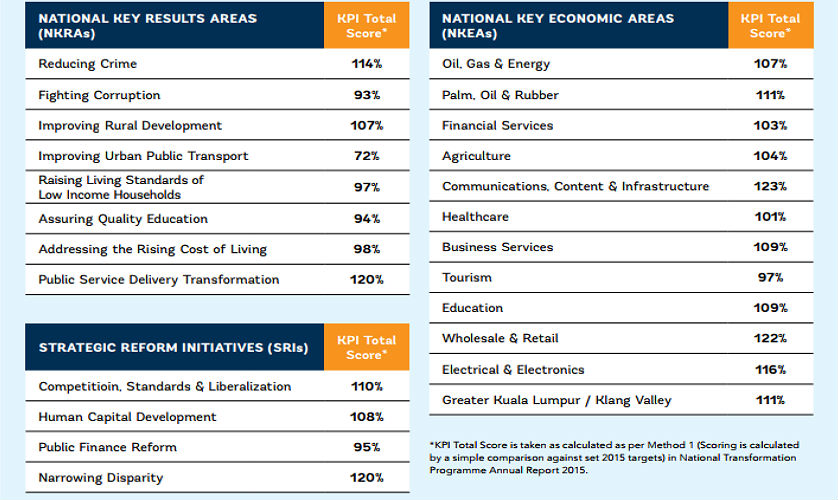 As indicated in the figure above, since the launch of the GTP in 2010, three main KRAs have performed very well.

“Occurrence of crime” has decreased with an average of 10% on an annual basis, based on the scoring methods developed by PEMANDU, with a total score reaching 114%”.

The only KRA that “underperformed” has been “Improving Urban Public Transport”.

Within each KRA, a specific set of KPIs have been monitored in time, as in the figure shown above – “Reducing Crime” included the following KPIs: % Reduction in reported index crime, % Reduction in reported house break-ins, % Reported street crime, # Inmates undergoing certified skills training, each associated with a performance score based on the scoring methodology chosen.

The PEMANDU initiative, not only economically and socially impacted the Malaysian economy, it acted as a tool to foster stakeholder engagement during the macroeconomic transformation process, but also political commitment, given the fact that appointed Ministries in charge of the KRA were in strict contact with the Malaysian Government.

However, the overall success of the PMS was mainly attributed to the use of sound performance measurement models (The Big Fast Results method – BFRI) that consisted of identifying the areas of interest that will go through a transformation process to ensure performance improvement in the long-term.

Once it identified the target areas, PEMANDU summoned an international panel of experts from the IMF to assess and review the performance progress on an annual basis, through a customized KPI framework, specifically developed in partnership with the Malaysian government.

What made PEMANDU such an effective tool?

PEMANDU has operated with a single measure of success – the extent to which projects contributed to Malaysia’s becoming a high-income economy as classified by the World Bank.  With such an objective in mind, the Malaysian Government has continuously supported the PEMANDU initiatives especially in the form of financial investments.

Given that the country’s leadership prioritized the implementation of the initiatives required for a “better performing Malaysia”, those priorities had the top management’s full commitment, which were then translated into several granular projects.

The secret of its success can be attributed to the extensive stakeholder’s workshops that lasted 6-9 weeks, called “Labs”, which focused on breaking down each industrial and sectoral priorities into concrete projects with responsible timelines, ministries, and above all KPIs. The collective leverage generated by the representatives from government agencies, the private sector, and civil society ensured a successful consultative process during these Labs.

As illustrated in the figure above, during the entire duration of these performance management meetings, the involved participants will research and plan for the resources needed to create a solution, within a specified timespan, which encompasses all the performance gaps presented within a specific KRA or KEA.

The aim of such sessions is to ensure discussion and brainstorming activities take place, in order to deliver an implementation plan, with identified KPIs that will be monitored on a timely basis.

In the case that, during the routine KPI monitoring process, if an indicator was not relevant anymore, PEMANDU would have supported the KPI selection process, through a workshop gathering all of the required ministries, with the key result area being put under analysis.

PEMANDU’s problem-solving workshops, commonly known as Labs, belong to a broader performance improvement methodology known as “The Big Fast Result” methodology, that is anchored in the 8 Steps of Transformation, which the in-house consultancy firm has utilized as a means to ensure buy-in, alignment and implementation of performance improvement initiatives among the KRAs.

The Government of Malaysia has set up PEMANDU, the world’s biggest government “delivery unit” with the objective of ensuring a transformation of the Malaysian economy to a “High-Income Nation” by 2020 (Wawasan 2020) by facilitating the delivery of NTP initiatives.

In its 7th year of operation, performance data has proved that Malaysia has moved and is still moving towards the right direction, starting from reducing income disparities within the Malaysian society, and above all ensuring better citizen outcomes in terms of security, access to healthcare, mobility and education.

The program, however, has faced criticism from some political parties, second-guessing the overall performance results of specific KRAs in association with the NTP initiatives. The criticism was due to the fact that certain KRAs indicators were focused on the intermediate outcomes rather than the actual impact of the Program.

As we are entering in the final phase of the NTP, the Malaysian government has decided to implement some changes, by transitioning PEMANDU’s role and responsibilities over to the Economic Planning Unit’s Civil Service Delivery Unit, which during the last seven years has acted under the guidance of PEMANDU, as the driver of the Malaysian transformation towards Wawasan 2020.

Throughout 2017, the majority of the transformation conducted so far has been transferred under the responsibility of the Civil Delivery Unit service. Between 2018 and 2019, this transfer process will continue ensuring the continued implementation of the National Transformation Program.

In conclusion, the road towards Wawasan 2020 is far from being done, however, it must be acknowledged that the performance management reforms based on a KPI framework have resulted in improving the efficiency of both private and public service delivery, ensuring better citizen outcomes and installing a more progressive, united society based on a diversified economy.

The challenge to be faced now is to ensure the continuous alignment between the Malaysian government and the Civil Service Delivery Unit, which will continue to work without PEMANDU’s supervision, implementing the National Transformation program towards achieving better prosperity and opportunities for all of Malaysia’s citizens.