Performance Magazine > Strategy > Articles > How to improve your decision-making process? Part I

How to improve your decision-making process? Part I

Making decisions is not an easy job, irrespective of the context where we have to make decisions. A woman’s decision to buy a certain pair of shoes may take as long as it takes a manager to decide upon a major organizational problem. The difference, however, lies in the data behind the decision. To choose the perfect pair of shoes you don’t need any data; it’s a matter of what you like more. In the other scenario, it’s a must to base the decision on data. Otherwise, you may follow a wrong direction.

According to the same survey, on average, survey respondents sustain that big data has improved their organizations’ performance by 26% in the past 3 years, and they believe that it will improve performance by 41% in the next 3 years.

The idea that data leads to better decisions is also sustained by other studies. Another example is an academic survey conducted in 2008 on 179 large publicly traded firms from U.S., which revealed that companies oriented towards data-driven decisions (DDD) have increased productivity with 6%.

If data is so important, how do we collect it? From where do we gather the data we need, in order to base our decisions? As it can be seen from the graphic below, the first data source is the data from business activities, followed by office documentation and social media. For the consumer goods and retail companies, the most important data source is the point-of-sale data, followed by social media. 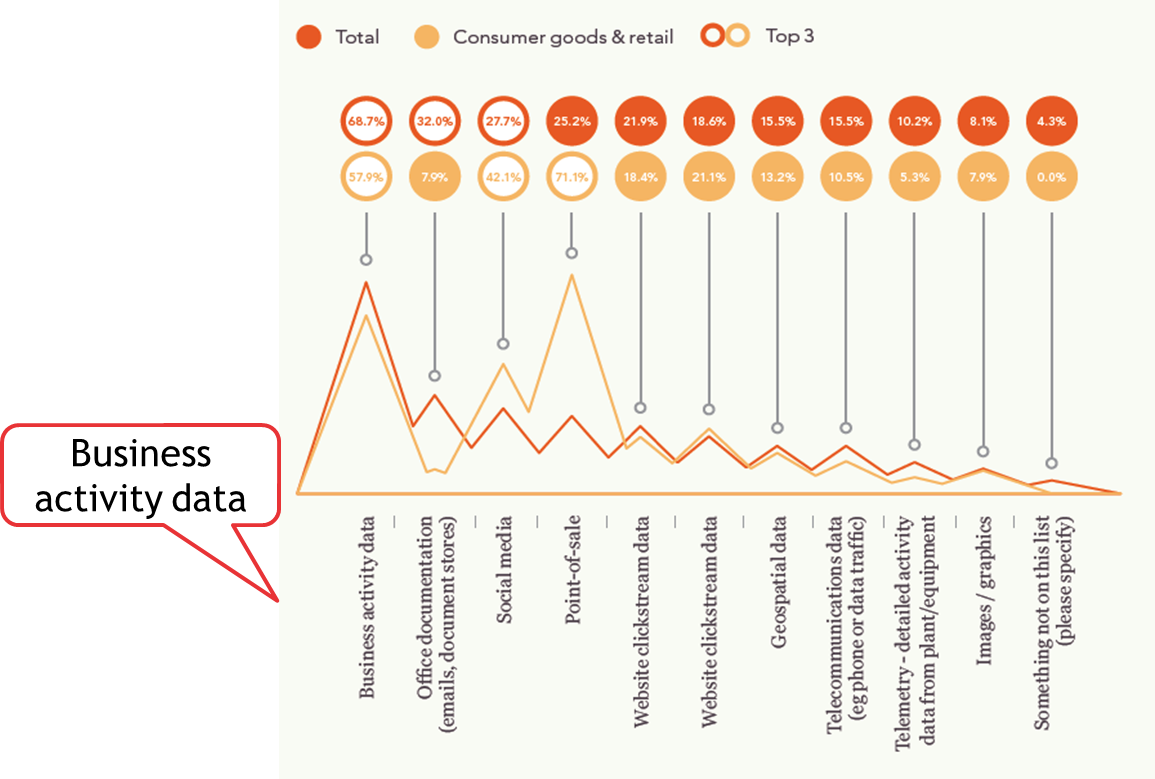 Now, here comes another issue. How do we integrate all this data? Because too much data can also be a problem. 40% of the interviewed executives who participated in the Economist Intelligence Unit survey complained that they have too much unstructured data, being difficult to analyze it and use it to base decisions. Moreover, 85% of the interviewed executives sustained that the problem is not that much the large volume of data, but the ability to analyze it and act on it in real time.

For this, it is crucial to develop a system where data could be integrated. CRM and ERP are such examples of systems that enhance data integration and facilitate its analysis. Afterwards, we need the right tools to analyze it. Today’s BI tools are mainly good at aggregating and analyzing structured data.

Professor Alex Pentland, Director of the Humann Dynamics Laboratory at MIT, stated that: Data is turning the process of decision-making inside out. Instead of starting with a question or hypothesis, people “data mine” to see what patterns they can find. If the patterns reveal a business opportunity or a threat, then a decision is made about how to act on the information.

So, it’s a fact. We need data to make decisions. What’s next? Find our what is the current maturity level of your performance management system by using our GPA Unit’s performance management audit service, and read about the 7 step decision-making process and the particularities of making decisions in specific scenarios in part II of this article.

Davide Valentini on Supply Chain Analytics at Barilla
Evaluation of Research, Development and Engineering through KPIs