Performance Magazine > Personal performance > Articles > Do you have a second passport? Visa restrictions, an important tool in today’s globalized world

Do you have a second passport? Visa restrictions, an important tool in today’s globalized world

Written by Adela Tudorache on August 20, 2013. Posted in Around the world, Articles, Personal performance

Before you travel abroad, it might be useful to find out whether the country you are travelling to or the transit countries require a visa or not. Otherwise, you might find yourself forced to come back.

What is a visa?

A visa can be very simply defined as an official authorization appended to a passport, permitting entry into and travel within a particular country or region. Thus, governments can control the movement of foreign nationals across borders, as a visa is a standard requirement for most countries as certain non-nationals want to enter their territory.

People should know that a visa does not necessarily guarantee entry to a country; it basically indicates that a consular officer of the country they wish to enter has reviewed their passport and visa application and considered that they are eligible. A visa allows people to travel to the destination, but only as far as the port of entry goes, whether it is an airport, seaport or land border crossing. Only then the immigration officer decides if a person enters or not that specific country.

Visa requirements (or the lack thereof) can also indicate the relationships between individual nations and the status of a country within the international community.

The Henley & Partners Visa Restrictions Index represents a global ranking of countries based on the travel freedom for their citizens. Henley & Partners, the global leader in international residence and citizenship planning, has monitored and analyzed visa regulations for many years, and as a result, it has been publishing the Restrictions Index since 2006, in collaboration with IATA. To compile the index, the unique global ranking methodology by Henley & Partners is applied to data provided by IATA´s Timatic passport and visa information database. 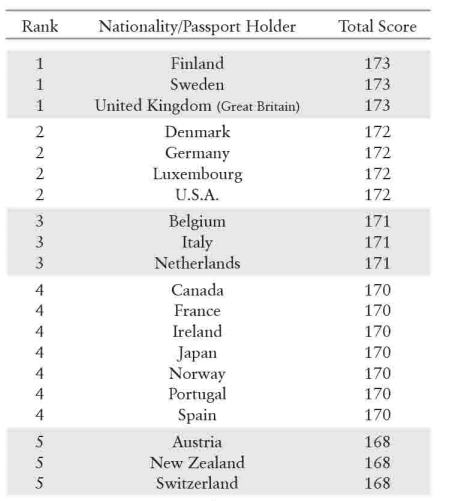 One may wonder what these two aspects have in common. Well, if, for instance, you are the head of a multinational company with headquarters in a European country, say France, you might encounter difficulties in bringing in a foreigner from Egypt, in case you need him as speaker for a conference. Both of you actually would have to go through a lot ‘steps’: standing in enormous queues to obtain embassy forms, filling them in (some requiring essay answers), medical examinations at specific doctors and further papers to be signed by the doctor (plus medical expenses). Moreover, it takes weeks for the application to be processed. So, you spend valuable time and money because of administrative issues. And in terms of performance management, that is not very…effective, nor efficient. But what would the alternative be? It would be much easier if he were…Austrian, for example.

And in exchange of $10 million, he could be. According to Henley & Partners, a direct investment of that amount of money, and for “rendering exceptional services in the interest of the Republic”, according to an Austrian government website, one can obtain an Austrian passport.

But Austria is not the only country in the world where new citizenship can be bought. Only for $100 000, you could buy citizenship on island of Dominica (a tropical Caribbean island, not to be confused with the Dominican Republic). Of course, applicants must be of ‘outstanding character’, ‘wait at least eight weeks for approval’ and ‘have a basic level’ of English, according to Dominica’s official website.

Most countries have provisions that allow the government to offer citizenship in return to major contributions to society, culture, economy etc. However, this happens quite rarely.

There are some countries that have special programs set in place, specifically designed in order to attract new citizens. In exchange of investments, of course. These ‘actions’ are known as Citizenship-by-Investment Programs. Here are some examples of countries that use these programs:

St. Kitts and Nevis (smallest nation in all of the Americas, island federation)

Investment: $250 000 to the country’s Sugar Industry Diversification Foundation or $400 000 in real estate

Investment: deposit of $100 0000 to the National Bank of Dominica. This investment amount doubles for a family of four.

Antigua and Barbuda (Caribbean island nation) – although not official yet, the program is supposed to start this August

Austria – the only EU country where citizenship investment is possible

Investment: “rendering exceptional services in the interest of the Republic” – $10 million

Not citizenship by investment, but residency-by-investment.

Singapore – a bit complicated to become a permanent resident

If you are not happy with what your country offers you, you can always go ‘shopping’ for another one. Presuming you afford and are willing to make major investments.