The secrets of creative thinking

When a class of kindergarten children was asked to think of new uses for a paper clip, 98% of them came up with so many new ideas that they were ranked as geniuses on the creativity scale. When the same children were tested again, five years later, only 50% of them scored genius levels. Another five years and that level fell even further. It is, thus, obvious, that the standardized educational process we go through gradually relinquishes us of our creative abilities, as Sir Ken Robinson, esteemed educationalist, the coordinator of the study, concluded. Nonetheless, over 1,500 CEOs, included in an IBM survey, isolated creativity as the number one characteristic a future leader must possess in order to surface the business world of today.

Two questions then arise, namely: why is creativity crucial both for thriving in the extremely volatile business environment of today and for juggling our daily life problems and also, is it indeed slowly suffocated through rigid educational styles?

Firstly, how is creativity defined today, in the light of new neuroscience and behavioral psychology advancements? Bronson and Merryman, authors of “The creativity crisis,” explain that researchers agree that creativity is the ideal combination between two thought patterns: convergent and divergent thinking. The former activates the left brain hemisphere and is related to practicality and combining new ideas to obtain the best results. The latter refers to the capability of generating as many new ideas as possible and it activates both the left and the right brain hemispheres.

The process of creative thinking generally begins with an analysis of the obvious, familiar possibilities. When these pay no results, the brain begins to scan through content and memories that are usually out of reach in order generate new, original ideas. While the right brain searches for unforeseen solutions, the left brain focuses on the appropriateness and applicability of these ideas. Ultimately, all these processes lead to that “Aha!” moment, when all our thoughts intertwine to create that one single, elegant solution to our problem.

Now that the process is clear, the focus can be locked onto the importance of creativity for our development, both career wise, and personally. In 1958, educational psychology professor Ellis Paul Torrance predicted, based on a creativity test, how accomplished a group a 400 children will be as adults. The results were revealed only 50 years later, when the same children, by then fully developed adults, were questioned. Torrance’s predictions had been so accurate that his measurement became known as the gold standard in creativity assessment. Basically, all those children with high levels of creativity ended up as inventors, writers, software developers, diplomats and so on. In fact, the correlation between lifetime accomplishments and creativity levels is more than three times stronger for CQ (Creativity Quotient) than it is for IQ (Intelligence Quotient).

Here is where IBM’s Global CEO Study enters the stage. In 2010, IBM conducted an extensive survey with over 1,500 CEOs from 60 countries and 33 industries all over the world. The results of the study were clear and simple: CEOs selected creativity as the number one trait needed for leaders and their organizations to survive on today’s business scene. This ability has ranked even higher than “rigor, management discipline, integrity and even vision,” according to IBM’s survey analysis.

Companies today are confronted with numerous challenges, many of them difficult to predict or to manage: massive changes, new legislation, shift of global economic power, intense industry metamorphism, overwhelming volumes of data and demanding customer preferences.

Thus, according to the CEOs interviewed by IBM in 2010, a creative leader will be more capable to tackle these problems as he is capable to: 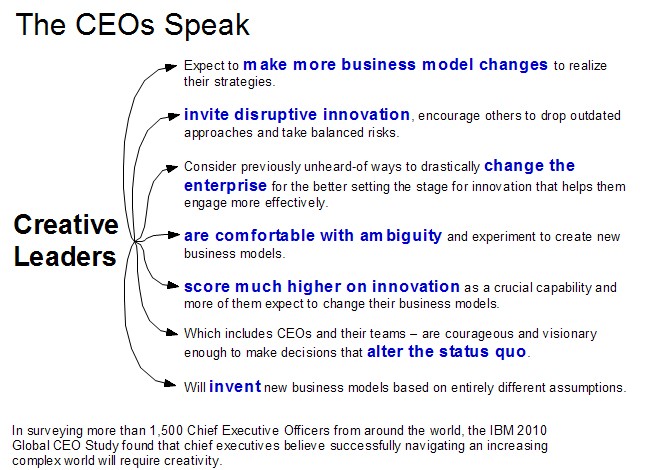 Another important finding is related to high-performing organizations (HPOs). As so many and diverse companies took part in the study, IBM was also able to highlight the attributes of HPOs, namely:

Despite its proven importance, creativity is becoming more and more a rare trait. While IQ scores have been proven to rise between 2 and 25 points with each generation, CQ scores are falling by the same rate and are also accelerated by the passing of time.

There is no single factor to blame for this situation. The guilt equally falls on the way in which children spend their leisure time nowadays (smartphone, computer, TV), and on the way education is restrained by strictly standardized curriculums. There is also a correlation between children coming from disadvantaged environments and high levels of creativity. The more problems one is faced with, the more probable it is for that person to develop creative skills. Therefore, in countries such as the USA, creativity levels are falling but in African countries, for example, creativity is measured at high levels.

However, no matter how low the creativity levels fall, the sunny side of the problem is that CQ levels can always be increased through various kinds of exercises: reading, writing, puzzle solving etc.

It is important, for those of us who are career-orientated and for those who seek to improve their personal performance, to acknowledge that, no matter how many tools, strategies, programs, diets or apps we use to simplify our lives but also improve our performance, we still have to go the distance in terms of involvement and effort to achieve the desired results. This applies to everything we do, not just creativity. However, through creative thinking we can tackle problems at a different level and come up with solutions, while achieving much more than just finding the appropriate answers.

The “why” behind self-improvement. A Self-Determination Theory approach
Microsoft Business Intelligence tools: how to get the best value out of Dashboards